It was a windy day in the 12th lock with a strong 7 point southerly making the potential for a game of two halves. Fortunately Lucan won the toss and elected to play with the wind. The first couple of opportunities for Lucan were well worked and even with the advantage of the wind the team needed experience and sound judgement to make the most of the conditions. Thomas Davis also managed to work the scoreboard but with much greater effort. Many of the Lucan points came from distance with some lovely points from frees and play with some points coming from outside the 45 aided by the strong wind. Lucan had restricted Thomas Davis to few chances but unfortunately conceded a well worked goal just before half time. The first half finished Lucan 0-14 to Davis 1-05 making an anxious start to the second half for the large contingent of home supporters.

The second half was much more structured for Lucan who rarely conceded possession. Set piece play, Kick outs and frees were well managed thanks to Alex Bernie in Goal and Henry Keogh in midfield, this allowed a sound platform for Lucan to further build on their first half lead and although scoring was closer Thomas Davis did not take advantage of the conditions as Lucan persisted through teamwork and pressure exerted by the Lucan defence. A goal by Jack Lawlor in the closing minutes and a couple of points by Jack Behan and Mark Lavin secured the result for Lucan.

Our Junior C men’s Football Team are looking for a coach to assist with their development. Training is on Wednesday evenings with games on Sunday afternoon. If you have experience coaching and are interested in assisting this young and promising team please contact Michaela Caseley @ 0868508553

A great result for our U21 ladies this week-end as they beat Na Fianna 4-14 to 3-7 in the Division 1 semi-final and now take on St. Judes this Sunday, details when confirmed will be posted on the web and socials.

Applications are now invited for the position of Senior Camogie Manager. Anyone interested in being considered, please email secretary.lucansarsfields.dublin@camogie.ie. Closing date is Friday 9th December 2022. All applications will be treated with the strictest confidence.

Our U21A’s compete in the B Championship Final this Saturday they play away to Commercials at 2PM.

We have taken delivery of the Christmas Draw tickets and, as in previous years, these need to be distributed by hand to all Lucan Sarsfield’s members addresses. Anyone willing to help should please text Michaela on 086 8508553 with the estate(s) you can cover. This is not ticket selling, it is just dropping envelopes into letterboxes. Tickets will be ready for collection in the club on Wednesday night from 8pm.

Last week the winner of a €50 voucher was Brendan McGarry. This Thursday another €50 voucher is up for grabs, all you have to do to be in with a chance to win, is link your supervalue card to your Sarsfields membership.

Next week’s Lotto will be for a jackpot of €9,800. The draw is sponsored by Diamond and Gem Jewellers and will be led by Shay Hurson. 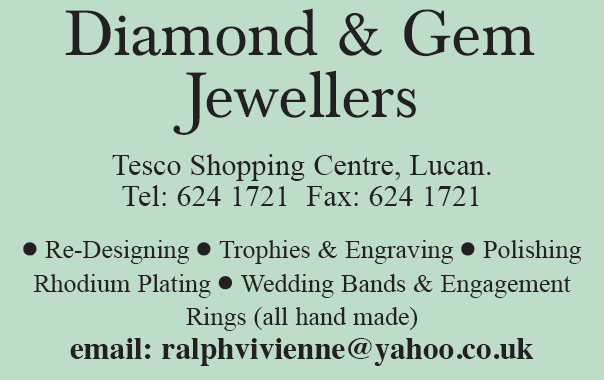 The draw will be held on Thursday 1st December, at 9pm and is streamed from Lucan Sarsfields Clubhouse, on our Facebook page.