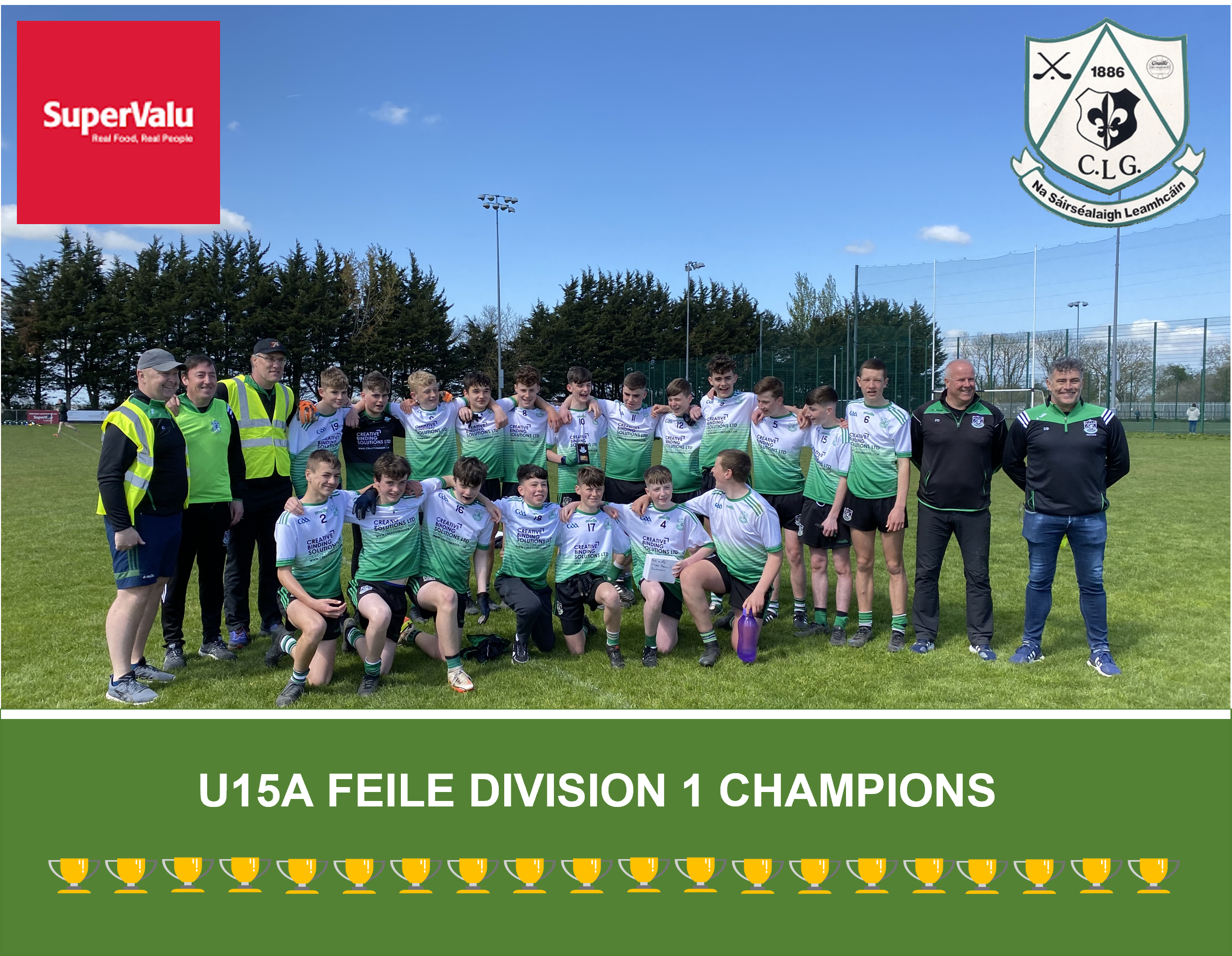 The Race day is planned for the 8th May. Prosecco reception at the clubhouse, four course meal with wine, professional tipster, exclusive raffle and complementary bus from the clubhouse. 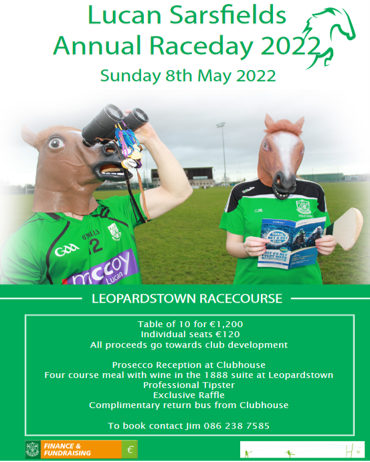 Annual Golf Classic Lucan Golf Club will take place on Friday 17th June 2022. A 4 Person Team is €400 (€320 before 11 Am), Goodie Bag, 2’s Club, Nearest the Pin, Longest Drive, a Meal and Raffle on the night. All proceeds in support of Club Development.

This Thursday Music Bingo will be in the Club Bar, it promises to be a lot of fun with eyes down and ears open from 9pm, entry is €10. 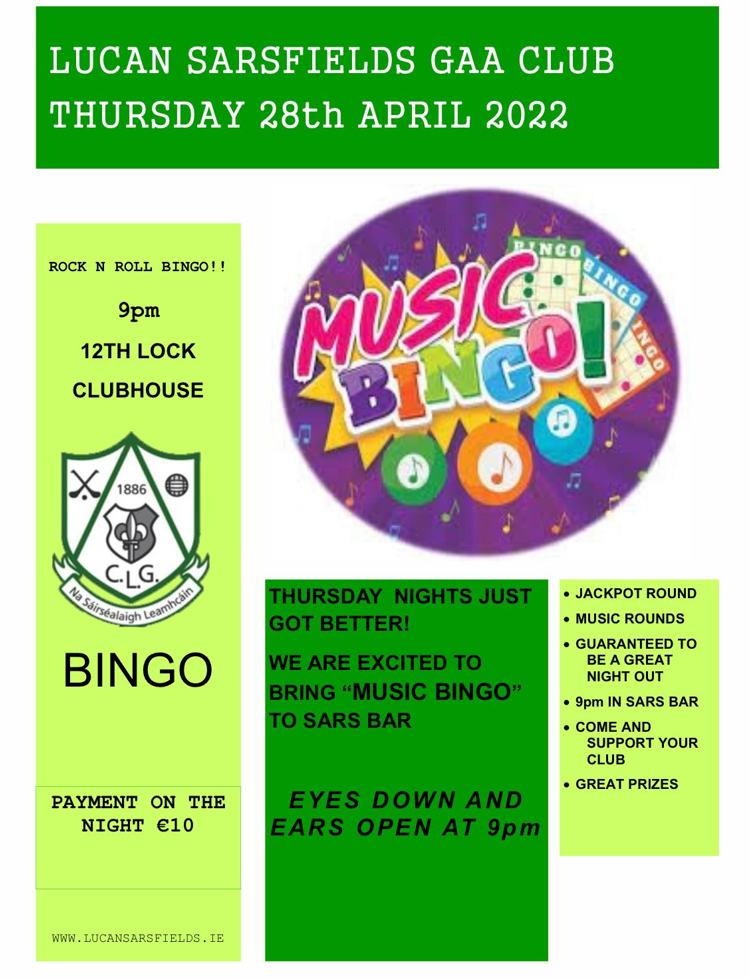 Lucan Sarsfields will host Fossetts Circus from the 26th April until 2nd May. Sarsfields Members can avail of a limited number of tickets available from the 13th April at a special rate of €8 in the Café. 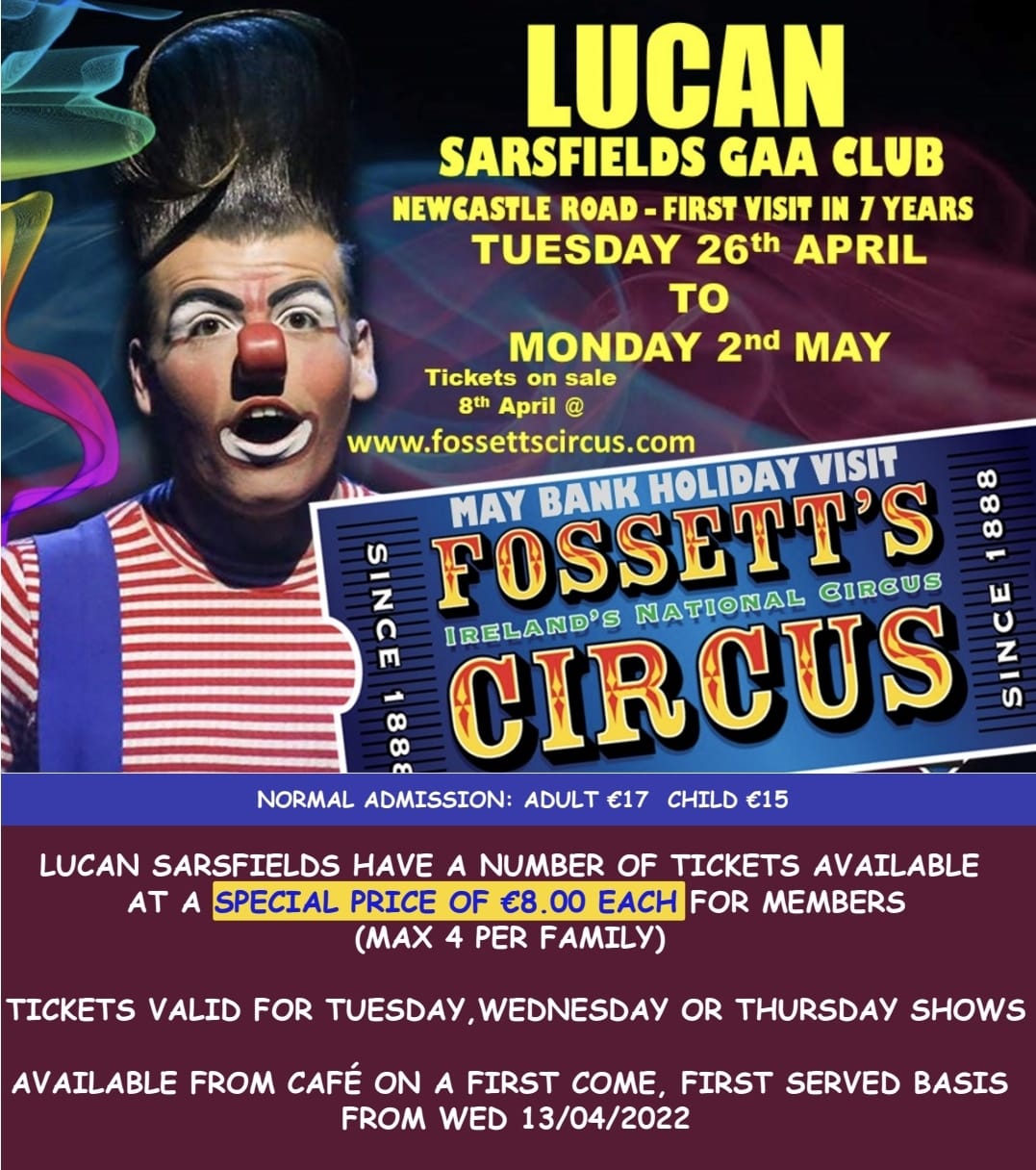 Following the brilliant success of the Leinster Senior League win and then the very disappointing Cup defeat to St. Vincents, Lucan were glad to be back to near full strength for the next round.

From the outset, Lucan were obviously the stronger side with a near immediate point from play by Phoebe Shannon, who followed that up with a 45 soon after.

Then, a strike from distance by Faye Murphy, which fooled the Castleknock goalkeeper, and dropped in under the crossbar within 10 minutes, and the tie was always in Lucan’s favour.

Castleknock did manage a few decent attacks, scoring one free and two points from play, but with Laura Sharkey dominating and centre-back and, either side of her, Rachel Leonard and Emma O’Brien cancelling out and real threats. The few balls that did pass these three, Avril Quinn, Rebecca Flanagan and Aoife Byrne were just too good. Jessie McClelland, back from injury, was playing so well, when her hand injury flared up again. Claire Meaney came in and gave her usual superb display. Amy Gorman looked composed in goal and hit some pinpoint accurate puck-outs to the very impressive midfield of Orla Beagan and the returning Marie Moynihan. Orla got on the end of a classy move and drove the sliothar to the back of the net early in the second half, as did Michelle Kelly later on. Ali Dunne, Anna Breen and Faye Murphy were causing problems all game and Phoebe Shannon ended up with a tally of 6 points. Millie Reid came in early in the second half and won every ball that came her way. Aisling Ní Ruairc was brought in a while later in goal, releasing Amy Gorman to have a run out field. She looked like she has always been out there.

Lucan Sarsfields B v Ballyboden St Endas C, AGP3, 19:15, Wednesday 20 April, 2022
On a perfect evening for football, with a very light wind and lots of sunshine, our Junior A’s, having taken the points in the previous two games; at home to Castleknock and away to Cuala, took to the field for their third league game against Ballyboden St Endas. From the throw in, there were opportunities for both sides, but it was Ballyboden who settled quickest, using good overlap play to take the opening score, a point from play after eight minutes. The overlap worked well for them as by the 13th minute they had brought their total to 1-3, all from play, and with no-reply. Lucan were attacking and had several chances to open the account, but they were either wide or short. Boden tagged on another score, then in the 17th minute, Ellie Wisdom pointed followed two minutes later by one from Aoibheann Stokes. It looked like things were beginning to work out, however it was all on way traffic against Lucan until halftime. Despite the good play by Ballyboden, two great saves by Lucan keeper Kate Britton, prevented the visitors from capitalising where it counted – on the scoreboard. After six wides in a row the away team eventually claimed another goal and a point before the end of the half, leaving the Junior A’s nine points adrift instead of 14 or more, halftime score: Lucan Sarsfields B, 0-2, Ballyboden St Endas C, 2-5

At the interval the management team were able to readjust and allow the squad to refocus, and it appeared to have the desired effect when Stokes found the net inside the second minute. Boden though were not done, picking up another point, and missed two more, before Mia Dunne converted a free over the bar. Sadhbh Murray ran from inside her own half, and stuck it in the back of the net, reducing the deficit to four points. From the 12th to the 20th minute there was nothing between them, Stokes and Dunne from play cancelling out Bodens’ two points, then Dunne from a free reduced it to three, and Stokes grabbed her second goal to level it with ten minutes remaining. A point from play by Kelly O’Brien, two more from play by Dunne, and some excellent defensive work by the Sarsfields backs, denying BBSE scores and opportunities, ensured Lucan kept their 100% league record intact.

All in all, while some of the game was difficult to watch for home supporters, the grit and determination of the squad shone through, giving example to any of our teams who find themselves behind at halftime. Well done to all!

The girls were back in action this morning after a brief easter interlude. Despite the bellys full of chocolate the girls put on an egg-selent display of football this morning. The girls turned up in a mighty force of green representing their jersey with pride. From the first whistle the Lucan girls dominated the play with fantastic skills on show, in only their second go-game of the season. Already players are looking to play as a team and convert their possession - bringing all their learned skills and drills from the training field to the match, which is very encouraging. Above all else, great to see all our girls coming off the pitch with smiles on their faces and new friendships blossoming. We go again next week moulding these future sars stars.

A home game for the under 9's against St. Brigids, who were tough opposition to go up against but the Lucan girls matched it with some super performances and great team work. Well done girls!

U10 hurling Go-Games versus St Vincents

Team 1 were involved in a very close ding-dong battle in Vincents. The Lucan team gave their all but St Vincents got a few late scores to shade it in the end. Ronan Kennedy put in a very busy performance and was constantly driving his team on.

Team 2 played very well against a strong St Vincents team. St Vincents were the better half, but Lucan came roaring back into the game in the second half. Jack Collins capped a fine display with a great individual goal while Cormac O'Gara won many turnovers in defence.

Team 3 were involved in a brilliant battle that contained great scores, tackles and blocks. The highlight was a cracker of a score from Jack O'Shea direct from a puck out. 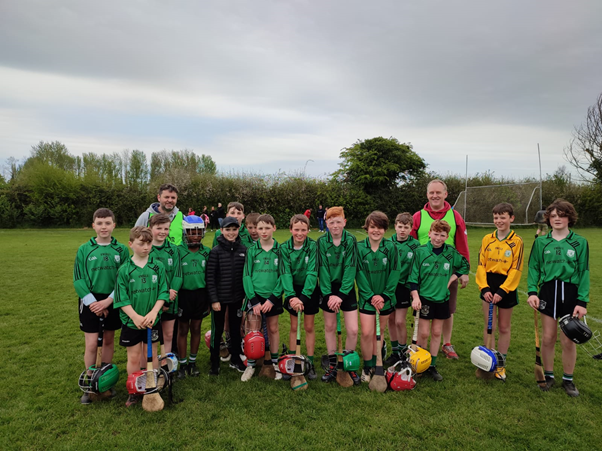 Lucan and St Judes U12A played a very entertaining grading game in a sunny Tymon park.
St Judes started the faster and scored two early goals from their pacey full forward line. Points from Oisin Brady and Daire Sheehan eventually settled Lucan down. Then before half time a high ball from Johnny Donovan was dropped into the net making it 2-3 to 1-2, Judes leading at half time. The start of the second half was a disaster for Lucan conceding 3 goals and 2 goal in a very short time. But Lucan battled back lead by Victor Adankin and Johnny in mid-field. Points from Daire, Johnny,  Leon Brennan, Tomás McSweeney and a goal from Alex Mahon made Judes sweat for the remaining few minutes. It finished with Judes winning 7-5 to 2-8. Mentors and parents all enjoyed the match which was played in a very sporting manner.

A strong performance by our C’s against St Judes, both teams battling hard, but Lucans resolve saw it difficult for Judes to get out of their half. When it did come down the defenders did a great job stopping Judes and clearing the ball, making Daniel H's job in goal easy. All this good work gave team Cs its first win as a team end score 5-2 to 0-1. Goals and points by Dylan W, Matthew D, Matthew F Cormac H and Ethan S, well done boys! 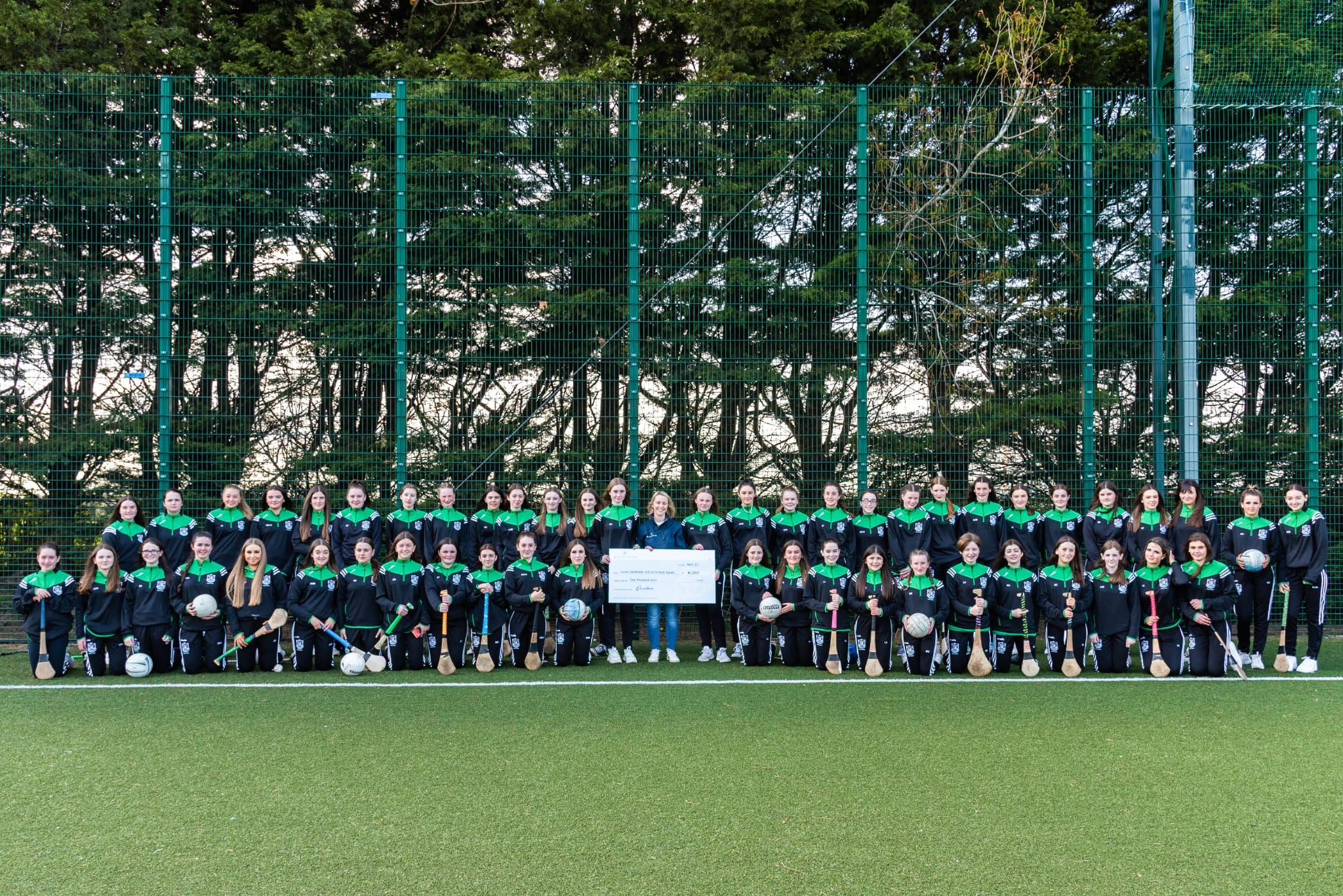 Our B team travelled to Sylvesters in Malahide and the day commenced with a parade and a cool sea breeze. The B’s played well in their first game the match ended Lucan Sarsfields 1-6 Stars of Eireann 1-2 and we had a great start. Unfortunately in the next game we met a strong Marys team and lost, Lucan Sarsfields 1-7 St Mary's 3-6. This meant it was all down to the final match which the girls had to win to stay alive in the event. With a great effort we got our second win from the hosts, Lucan Sarsfields 4-5 St Sylvesters 3-2. In a strange twist of fate we went to a play-off against the eventual winners of the tournament St Mary's. It was a special day with our thanks to Sylvesters who were tremendous hosts.

Our A team hosted the Feile in Sarsfields. They finished runners up and travelled to Sylvesters to play their Semi Final against Kilmacud in Bloomfield. Our B team remained on to offer their support. It was a very exciting match with two very even teams. At the end it was level and went to 10 minutes of extra time, the Lucan girls just lost out in the end as they tired in the last couple of minutes eventually conceding a gaol. With little time for a response the girls battled on but their final attack returned without a score leaving Kilmacud with the result.

Next week sees Lucan B’s host the Camogie Feile and the A’s travel to silver park. 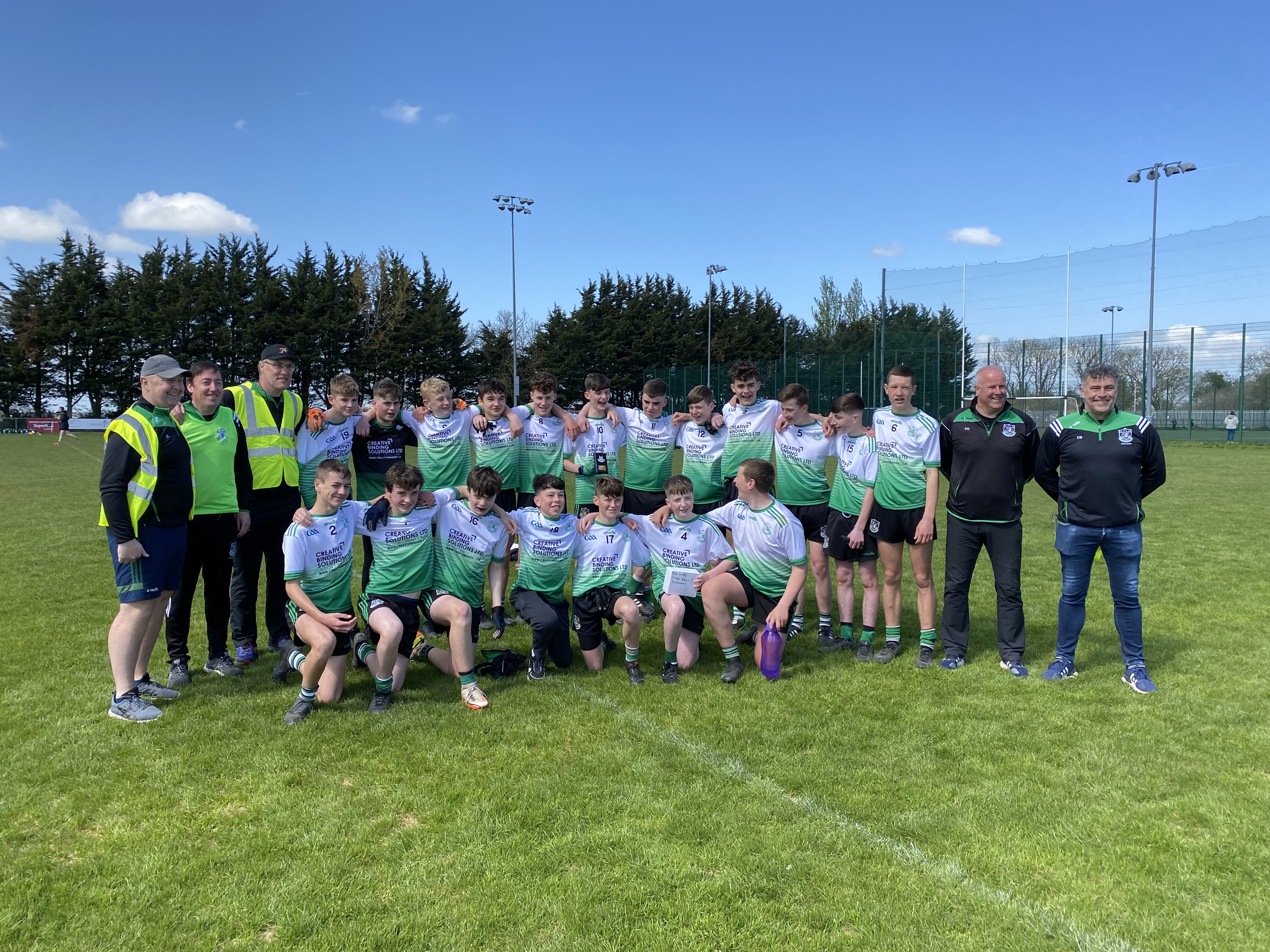 Our U15A boys played  Na Fianna, in the Division 1 Feile Shield final on Sunday at the 12th Lock the boys had the at their backs in the first half, but both teams managed to keep the scores to a minimum with little difference between the sides. Following the break Lucans game plan kicked into action and they manage to have an unanswered period of play. Na Fianna battled back towards the end leaving only a goal separating the sides. Final Score Lucan 3-11 Na Fianna 3-8. 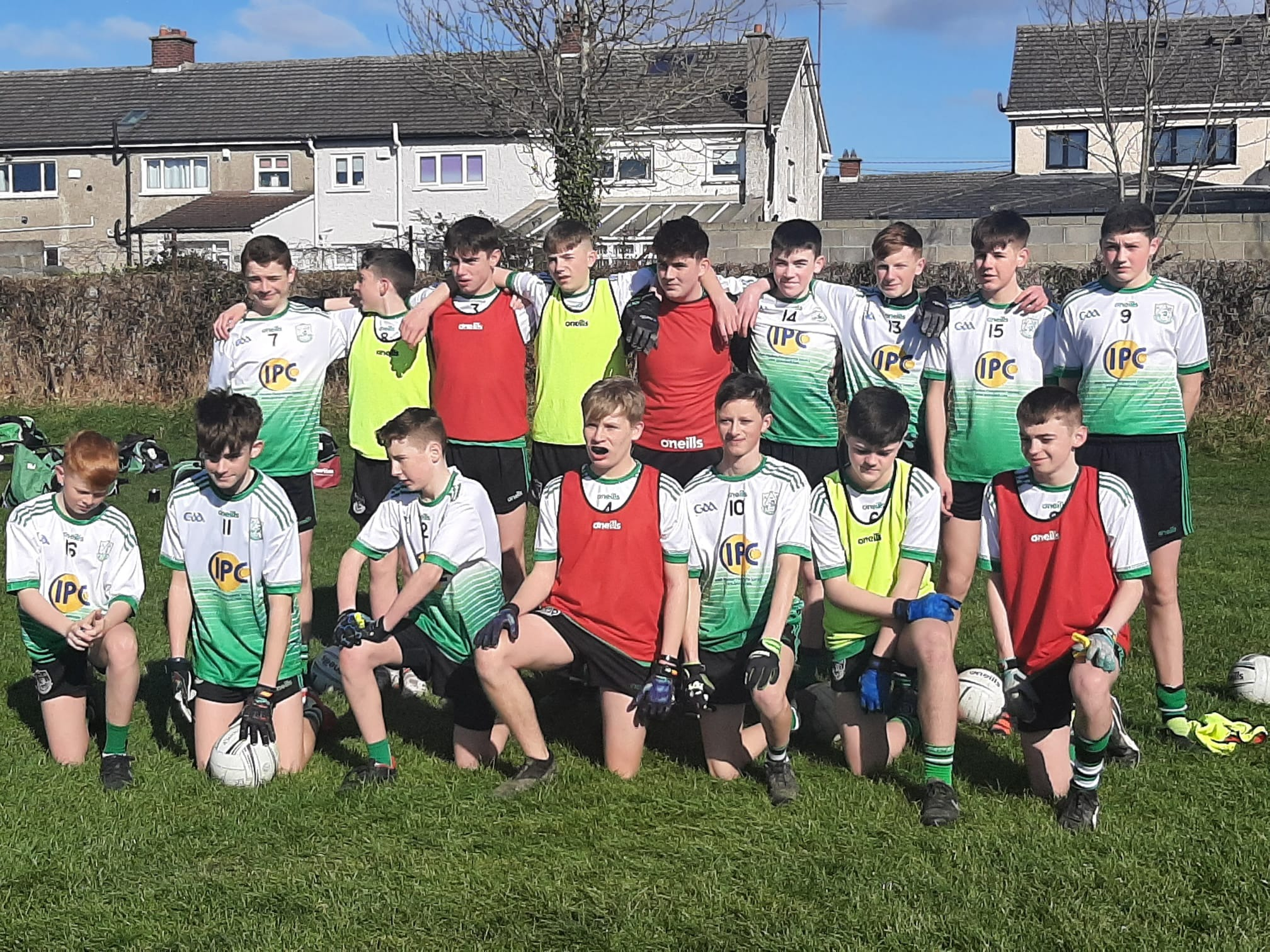 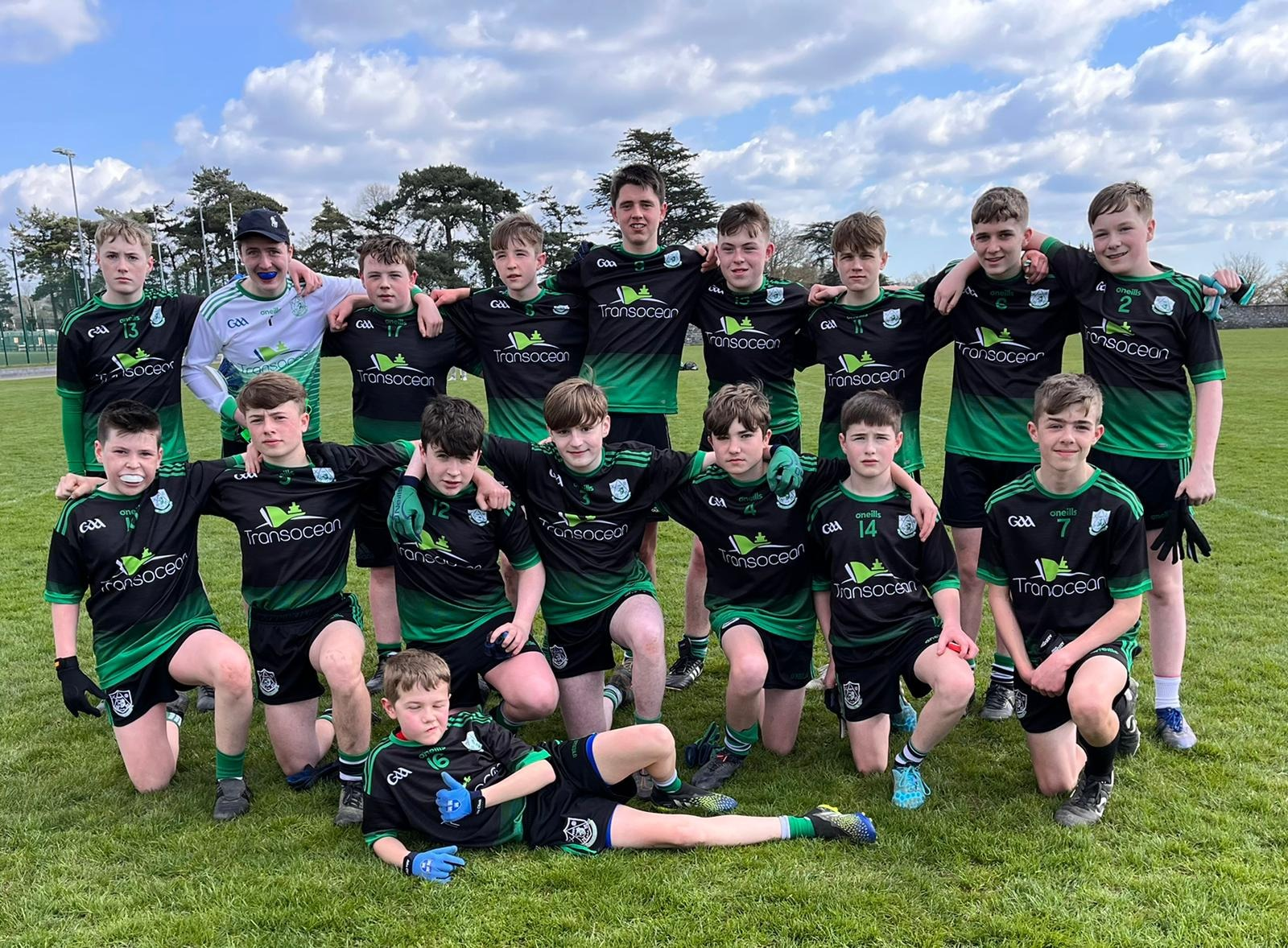 U15C football, were beaten by Castleknock in their Div 11 Feile semi final two weeks ago.

Great effort by all the teams in Feile, creating some wonderful memories for the girls and boys. The club is delighted to see the progression, keep up the good work all! 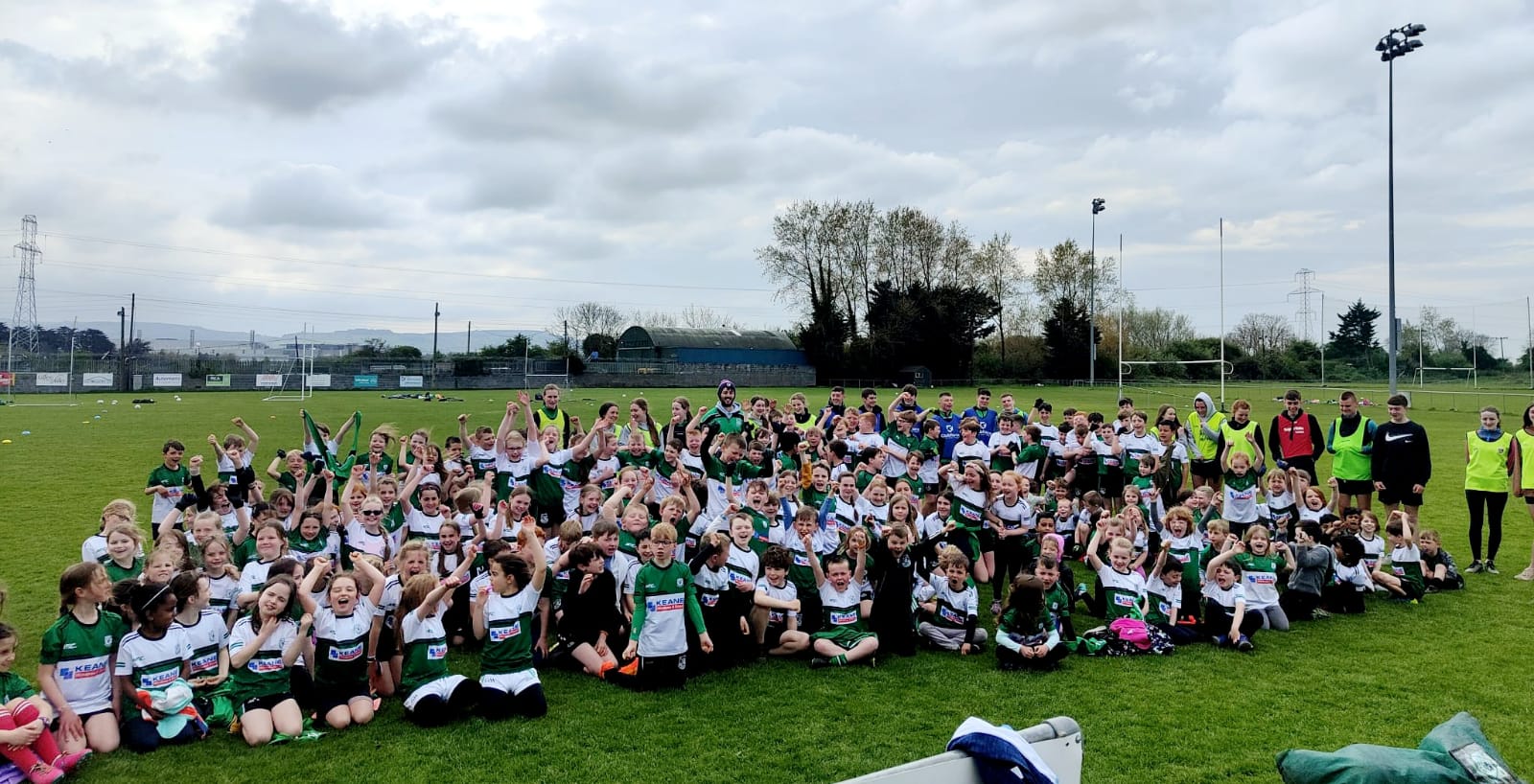 This week our Easter camp for younger players, aged 6 to those on the U12 teams took place. It was a really exciting time with plenty of happy faces and new friends made. Many are looking forward to the Summer camps with details updated on the website. 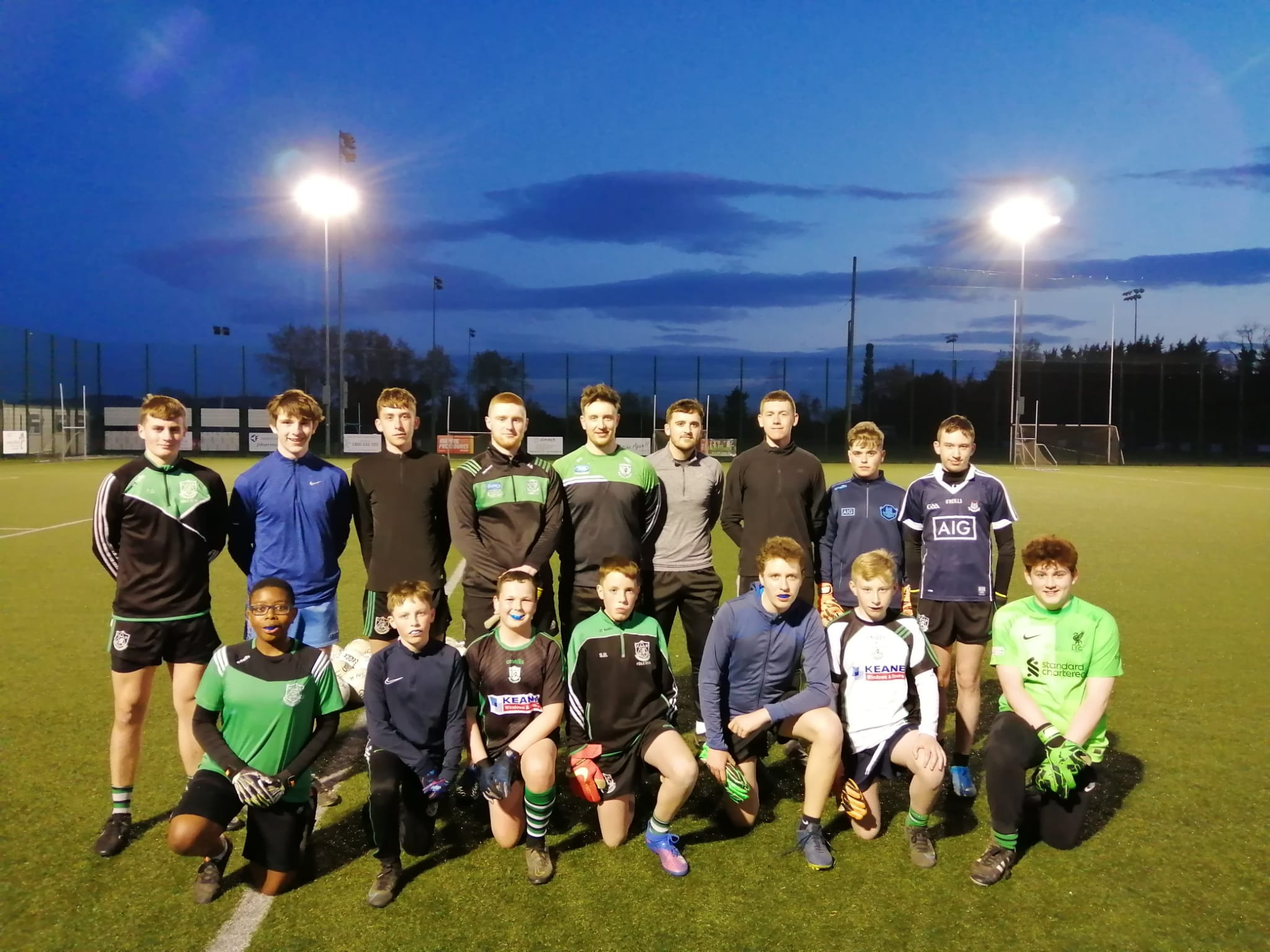 Big thanks to Ollie Collins and senior football management who organised a goalkeeping session on Friday evening. Lads really enjoyed it and learned a lot from their senior counterparts.

Next week’s Lotto will be for a jackpot of €10,600. The draw is sponsored by Henley Forklift Group and will be led by Mary Flannery.

The draw will be held on Thursday 28th April, at 9pm and is streamed from Lucan Sarsfields Clubhouse, on our Facebook page.