Congratulations to Lucan Sarsfields Junior B Hurlers, who are the 2021 Go Ahead Dublin Junior Hurling C Champions. They held their nerve despite a spirited Ballyboden challenge in the last quarter to earn the three point win to capture their third championship in a row, having won the Junior D title in 2019 and the Junior C in 2020. A tremendous achievement by all the players and mentors involved

Congratulations also to the Minor Footballers who are 2021 Minor A/B Shield winners following the 2 point win over Na Fianna.

Next weekend will see the Junior C Footballers take on St Marks in the Go Ahead Junior 6 South All County Football Championship Final on Sunday.

Following the announcement by Paul Quinn of his intention to stand down as Ladies Football Intermediate manager, the LSLF section, the club executive and all in Lucan Sarsfields will be forever grateful to Paul for his dedication, commitment, and contribution as a first team manager since 2016 and before that with various juvenile teams throughout the years. While his departure is regrettable, we all appreciate the huge sacrifices he has made over this period but have no doubt that Paul and the others will continue to contribute from the side-lines for many days to come. We acknowledge the valuable and lasting contribution Paul and his team of Niall McKelvey and Cormac Gordon have made to Lucan Adult Ladies Football having brought the team to back-to-back junior championship finals, promotion to Intermediate grade and to the brink of moving up to Senior Division One level. We wish all involved and their families every future success. The Ladies football committee have commenced the process of considering suitable candidates to replace Paul and his management team, and anyone expressing an interest in the role can make contact to LucansarsfieldslfComm@gmail.com or Billy Egan.

The Golf Society will hold its AGM on Tuesday 16th November 2021 at 8.00pm in the clubhouse. All welcome. Please bring facemasks.

Lucan Sarsfields Junior C Footballers in conjunction with Lucan Healthy Clubs are hosting a Quiz Night on Friday 26th November at 8pm; the quizmaster will be Tommy Flannery. All proceeds go to Lucan Homeless Donations. Entry is €5 per person or €20 for team of 4. For more info and to purchase tickets, please contact Michaela Caseley on 086 850 8553. Tickets also available from behind the bar, and at the door on the night.

Please use this link to the GAA Club Newsletter for November, 2021: https://www.gaa.ie/news/read-the-latest-club-newsletter-november-2021/

Included in this issue is:

The Jackpot for the next draw is

and is sponsored by:

The next draw will be held on Thursday 18th November, at 9pm, managed by Shay Hurson and

will be live streamed from Lucan Sarsfields Clubhouse, on our Facebook page.

Make sure your entry is submitted before 6pm on the evening of the draw to be included in that week’s draw..

Go Ahead U20 Championship Division 1 Gr2

Go Ahead U20 Championship Division 3 Gr2

Minor Football A / B Championship Shield

Go Ahead Under 21 A Football Championship

U16 Football A Championship Knockout Games

A disappointing week for Lucan adult hurling continued with the Minor A hurlers going down to Raheny in the championship semi-final after an intense struggle that required extra-time to separate the teams.  Both teams missed early chances before Lucan opened the scoring with a free from Joey Dunne.  Scores remained scarce through the first quarter with Lucan’s first three points coming from Dunne frees, before Liam Garrigan split the posts from distance to get the first from play.  Lucan had the edge on the scoreboard at this stage but Raheny remained well in touch until Sean Harkness goaled for Lucan to open a decisive gap.  Lucan led 1-6 to 0-4 at half time.  The hurling remained intense in the second half though never matched the fluency of Lucan’s epic quarter-final win over Crokes two weeks previously.   Further frees and one from play from Dunne and a couple from Hugh Cuffe saw Lucan retain a comfortable advantage.  However, Raheny stormed back in the final 10 minutes with a goal and four unanswered points to take the lead and all the momentum into the closing stages.  Lucan refused to give in and battled back to force a ’65 which a nerveless Joey Dunne pointed from a challenging angle to force extra time.

Both teams gave their all in the extra 20 minutes as the game reached new levels of intensity.  However, it was the home side that created the scoring opportunities to lead by two at the end of the first period and extending that to three as the game reached a conclusion.  Lucan made valiant efforts to get an equalising goal in the final minutes but the home defence held firm and Raheny clung on for a dramatic win.  A disappointing end to the season for Lucan but they can be very proud of the effort put in and the development shown over the year.  Many of this team were in their first year as minors and acquitted themselves very well at that level.  With the changes coming in competition structures, this group can now progress to represent the Club at U19 next year and hopefully go on to greater success at adult level.

This final was played in perfect conditions on a very pleasant November morning before a large crowd at the 12th Lock. Lucan started brightly and opened the scoring with a point from play from Ciaran Keane. Two more from Keane, one from play and one from a ‘65, had Lucan 0-3 to 0-2 ahead after 10mins. Points from Shane Donohue and Evan Lombard stretched the lead to 3 points, but then Boden responded with a point and then broke through the Lucan defence for a goal in the 15th minute to take the lead. A pointed free from Keane and another from play from Lombard had Lucan ahead again 0-7 to 1-3 at the water break. Scores were harder to come by in the second quarter as the game was very evenly contested. Points from Alex Hanley, Lombard again and a Keane free helped to keep Lucan just ahead at half time, 0-10 to 1-6.

The tension and excitement grew in the second half as both teams battled it out for final honours. Lucan again opened the half well with Ciaran Keane pointing a free and then sending a line ball directly to the net to open a decisive 5 point lead. Keane added another point from play to extend the gap to six points and Lucan looked to be on their way. However, the visitors refused to lie down and hit back with a goal and a point to reduce the gap to two again after 11 minutes of the half. The goal also came from a sideline ball which deceived the Lucan backs and goalkeeper to find the net. Points from Joey Byrne and a Ciaran Keane free steadied the ship for Lucan and restored the lead to 4 points at the second water break. Ballyboden got the first two points of the final quarter to reduce the deficit to two points again and put Lucan under severe pressure. However a fabulous catch and score from Evan Lombard in the 55th minute gave Lucan some breathing space again. The closing stages were very tense as Boden came again with two more scores to leave just one between them. However, Lombard again came to the rescue twice winning possession and frees which Keane duly converted. Boden now needed a goal to stay in it and they laid seige on the Lucan goal in the last minute. But the defence held firm and the final whistle triggered jubilant scenes for the home supporters.

This was a deserved win for Lucan who had the perfect blend for this level, some very experienced players to provide the guile and enough youth to provide the energy and work rate.  Evan Lombard gave an outstanding man of the match performance and is more than ready now to progress to a higher level team, as are a few of his teammates including Ciaran Keane who had an excellent hour also scoring a total of 1-10. Full back Brendan McGarry was outstanding in a very solid Lucan defence. Great to see veterans such as McGarry, Joey Byrne, Tadhg Clandillon, Aidan Glover, Ian Fitzgerald and Kevin Roche play such a significant part in the Championship campaign and secure a coveted championship medal. 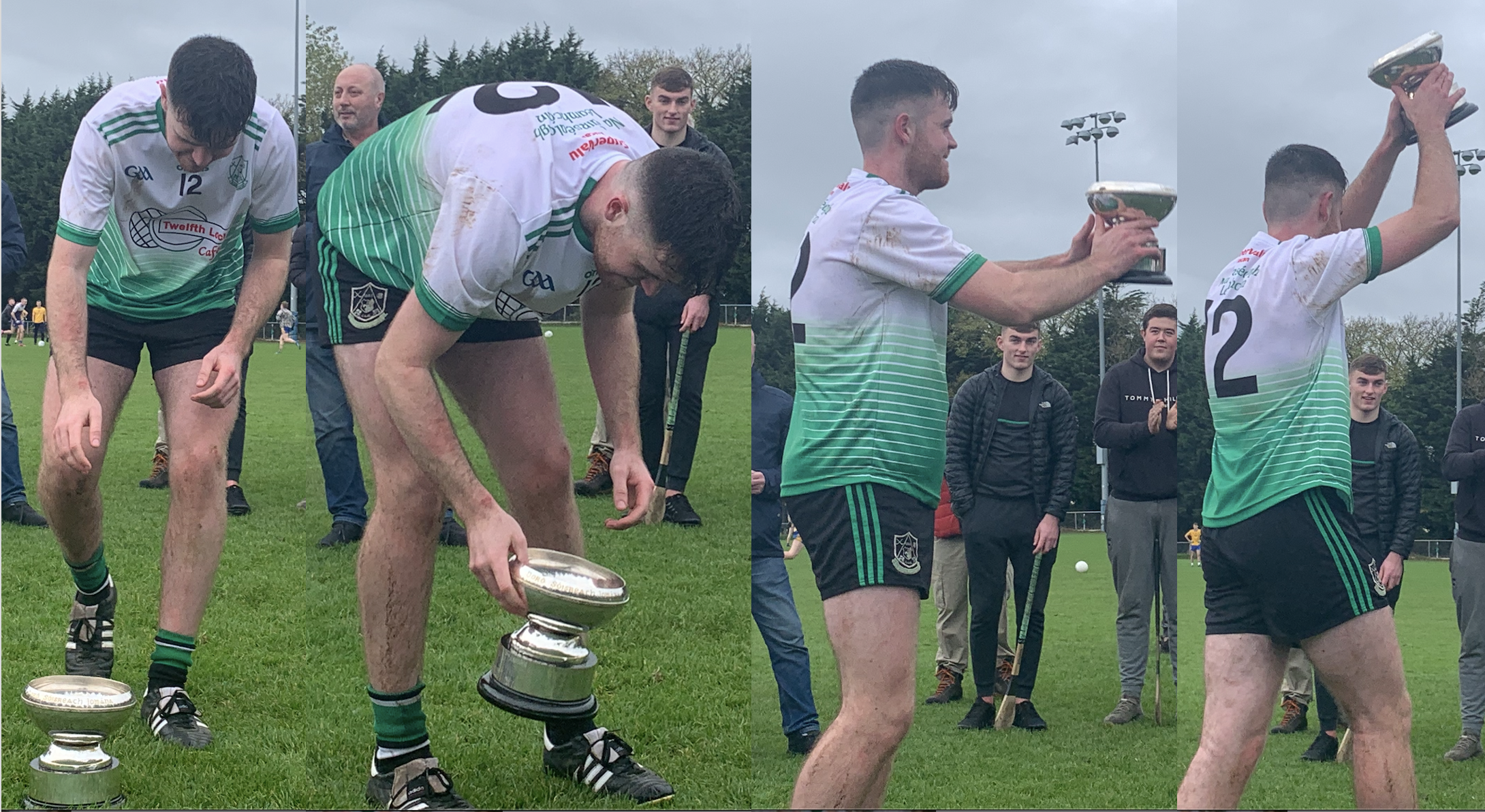 Team captain Ciaran Keane accepted the cup on behalf of the team and acknowledged in particular the contribution of Andy Carroll and Kevin Roche who both played a huge role in getting to the final but missed out through injury.