The Go-Ahead Dublin Senior Football Championship gets underway on this Sunday, September 12th when Lucan take on St Judes at 2pm in O’Toole Park. Entry is by ticket only, (please contact Joe Lavin 086 815 4635 to purchase, €10 each)

At 11am on the same day the Intermediates also face St Judes at Tymon Park, while the Junior A’s are away to Naomh Mearnog, and at 3pm, the B’s are at home to Ballymun Kickhams and the D’s are away to St Peregrines. Best of Luck to all

All our adult hurling teams were in action in the opening round of the championships and it was a decent start with three wins from four. The Seniors, Junior As and Junior Bs all had wins, with varying degrees of comfort, while the Junior C’s put up a good performance but ultimately lost out to a more experienced St Vincents team.  Highlight of that game was the unexpected arrival of a cygnet (young swan!) on to the pitch with Lucan mentor John Egan showing his defensive skills in carefully shepherding him to the side-line.

Commiserations to Abby Shiels (player) and Paul Casey (back room team) for the Dublin Senior Ladies Football team, who lost out to Meath in last weeks final.

We had over 180 entries in the draw for one lucky member to be able to purchase 2 tickets for this Saturday's Mayo v Tyrone All Ireland Football Final.

Congratulations to Sean O'Conghaile, who was drawn out after the Lotto results, live on facebook. Thanks to all who entered. 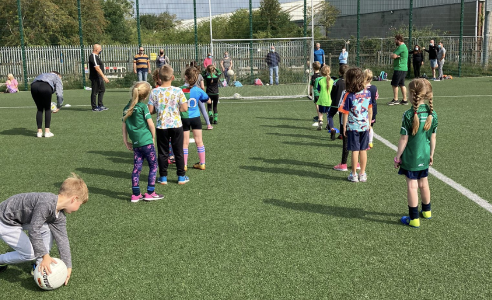 A record turnout at the Academy last Saturday when over 280 boys and girls attended over the three hours.

GAA/LGFA/Camogie issued revised covid-19 guidelines during the past week. The Health Questionnaires should continue to be completed ahead of all training sessions and games and the Return to Play guidelines issued earlier in the year should continue to be adhered to. The Health Questionnaire was recently updated to reflect the additional symptoms associated with the Delta variant. It is important to note, that regardless of whether a player/participant is vaccinated or not, if they have any of the symptoms associated with Covid and detailed on the Health Questionnaire, they should not attend a training session or game.

As the evening are getting darker, please ensure that all sensible precautions are taken when attending games and training, do not walk alone through public parks, ensure children are collected promptly after sessions, cyclists, wear hi-vis clothing, etc.

There are a number of items of clothing: club tops, hoodies, etc., that were left behind after the recent summer camps. If you child is missing any of these items, please call up to the club and collect from the area outside the dressing rooms.

This Ring was found in the Ladies toilets on September 3rd, would the owner please call up to the bar to collect it 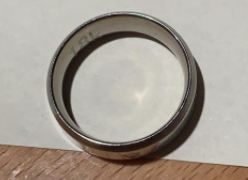 The last outing of the year is in Millicent on Sat 25th Sept.

Golfer of the Year, - best 3 cards - (seriously hotting up now), will conclude in Millicent. 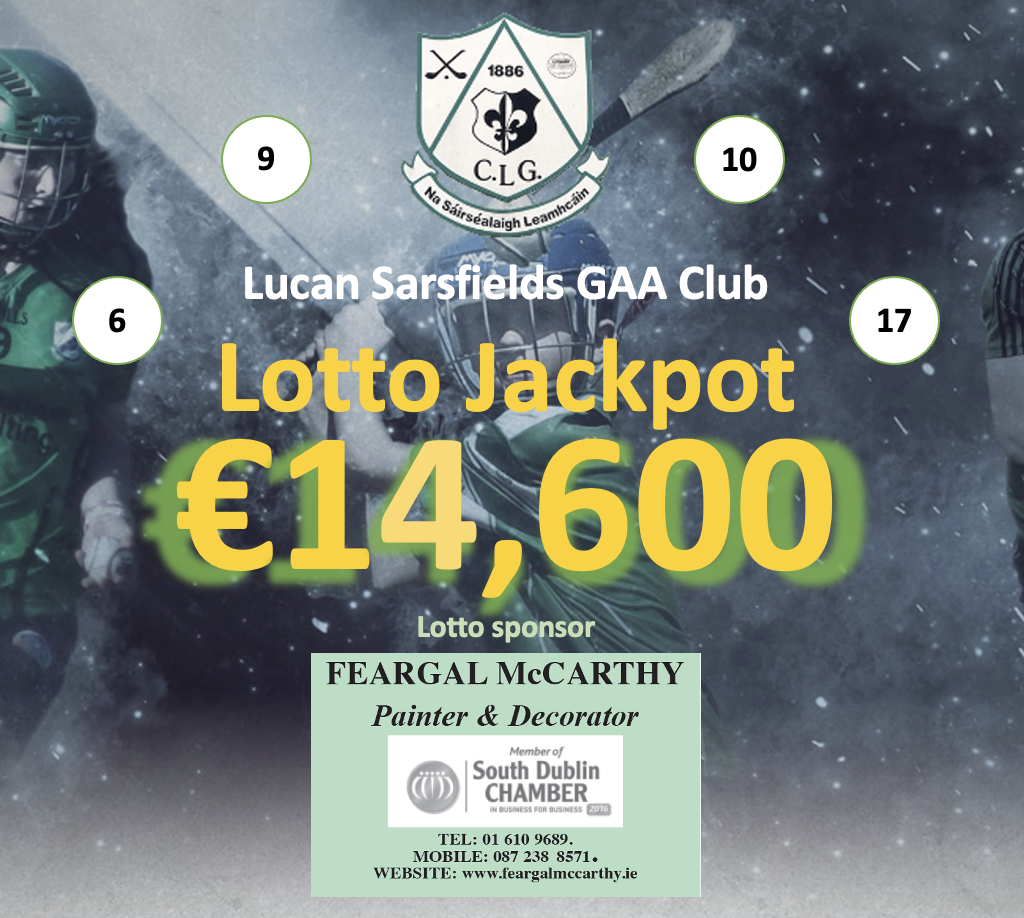 The draw, managed by Shay Hurson, will live streamed from the Clubhouse at 9pm to our Facebook page.

Go-Ahead Championship Junior 5A Group A

We Are Dublin Camogie Championship U16 Division 1 Group 2

We Are Dublin Camogie Championship U14 Division 1 Group 2

We Are Dublin Camogie Championship U14 Division 4 Group 2

We Are Dublin Camogie Championship U13 Division 1 GR1

U16 Hurling A Championship Gp.3

We Are Dublin Camogie Championship U15 Division 1 Group 1

Lucan seniors got the championship campaign off to a good start with this comfortable win over Setanta.  Lucan led throughout the match and never looked under too much pressure despite clocking up as many wides as scores.  Lucan got on top early and were 0-8 to 0-2 ahead at the first water break.   The second quarter was less fluent though but the margin remained comfortable 0-12 to 0-5 at half time, and extended a little further by the second water break, 0-15 to 0-7.  Lucan’s wayward shooting and sometimes poor shot selection helping to keep Setanta still in contention.  Lucan pulled away in the final quarter helped by a nicely taken goal from Paul Crummey.   The Lucan backs were comfortable throughout and a dominant half back line provided a good platform for the forwards.  The inside forward line of Charlie Keher, Ciaran Dowling and Paul Crummey were all in good form and picked off some great scores.  Overall it was a decent start to the campaign and plenty to work on for the tougher challenges ahead.

Lucan Junior A's kicked off their hurling championship campaign on Saturday evening at the 12th Lock in front of a nice crowd.  Fresh from winning the league, they were looking to continue their upward momentum. Peregrines were the visitors whom they drew with at the same stage on the way to the 2020 championship final.  Lucan started with a frenetic pace and were 0-3 in front with six wides before Peregrines registered their first score - albeit after two wides of their own. The visitors added three more scores with Lucan continuing to miss the target despite excellent build-up play.  With the sides level at 0-4 each after twenty minutes, Peregrines made a statement scoring two goals inside a minute.  Lucan responded with a second Evin Dowling free, a second score from Rory Stapleton and a converted penalty by Emmet Allen when the always-busy CJ Smith was pulled down inside.  Two points each completed the scoring in the first half which left Lucan behind by two at the break.

The pace dropped slightly in the third quarter as the game turned more scrappy with the visitors adding just two points to the home team's four - three of which were placed balls converted by the reliable Dowling to bring the sides level at the second water break.  Stapleton moved Lucan ahead on the resumption before Smith found a modicum of space to break free and lob over the advancing keeper for Lucan's second goal.  Peregrines discipline continued to be a problem and their No 7 got an early bath following a second yellow.  Lucan tried for more goals but were repelled. Lucan completed the scoring with two frees and a 65 from Dowling for insurance against two scores for the visitors. The final score was Lucan 2-16 to Peregrines 2-11. Lucan had a good all-round performance but their shot-selection and wide count will give the coaches something to work on for the second round against Skerries Harps who beat Faughs 0-22 to 2-9.

Lucan Junior B’s opened the defence of their Junior C Championship title won last year, with this very comfortable win over Kevins at the 12th Lock on Sunday morning.  Ciaran Keane was the leading scorer finishing with an impressive 1-14, including a combination of excellent scores from play, frees, line ball and a 65.  The veteran Aidan Glover (2) and Evan Lombard added the other goals.

Lucan Junior Cs were the final adult team to line out in the championship - playing at home on Sunday afternoon against St. Vincents. The game started at a steady pace in what was a warm afternoon with two opening scores by the visitors cancelled out by Jack McCarthy and Shaun Keegan. Vincents went two ahead again before Lucan levelled up before the first water break. Lucan then took control on the scoreboard with two more McCarthy frees, plus points from Daniel Coogan and Keegan again but the key score was a goal by Charlie Caseley when put through by Liam O'Connor. Vincents didn't score in the second quarter but did tag on four wides. Lucan were up 1-8 to 0-4 at the break.

Vincents started stronger after the break and took control around the middle and scored three points before another McCarthy free was put over. This was a brief respite as Vincents tagged on another five points to level the game before the next break. Eoin Power scored on the resumption but Vincents tagged on another five points and added a late goal to win on a scoreline of 1-17 to 1-10. The visitors were stronger and more mature, and the physical contest in the second half played more into their hands against a youthful but talented Lucan outfit. The light-hearted moment in the difficult second half came courtesy of a visiting cygnet who touched down smoothly in midfield - turns out it was wearing a white jersey with a blue hoop!

LucanSarsfields u13 Camogie Team played their first Championship game on a beautiful day in St Catherine Park against St Brigids in Division One .

All the players were eager to do well in their first championship outing but unfortunately conceded a number of  goals  in the First Quarter.

The next quarter they settled into the game, and played some good camogie.

After the half time talk, they came out with a new determination and scored some well earned goals and points.

They battled well through the second half , but were not able to pull back st. Brigids lead.

A lot of positives from the game and learning points.

Looking forward to our next game.

Lucan Sarsfields came from behind to win their first championship match in a very competitive game in Swords. The match was played in warm conditions and all the Lucan girls showed great teamwork in their support play on the field.

Lucan, who were unlucky not to have scored more in the first half, opened the scoring with a point from midfielder Ava Malone. St Finians responded on the stroke of halftime with a goal to take a 2 point half time lead.

The Lucan pressure & work rate started to show on the scoreboard in the second half. A long-range Sarah McBrearty goal regained the lead for Lucan which was quickly followed by another goal by the industrious Heidi Simpson. A dominant Lucan second-half was rounded off by a point from Erica O'Regan from a tight angle and a Laura Moran free, leaving a 6 point margin between the teams at the finish. Special mention to Devin Odia and Lexie Griffin who made an impact when they came on especially given it was their camogie match.