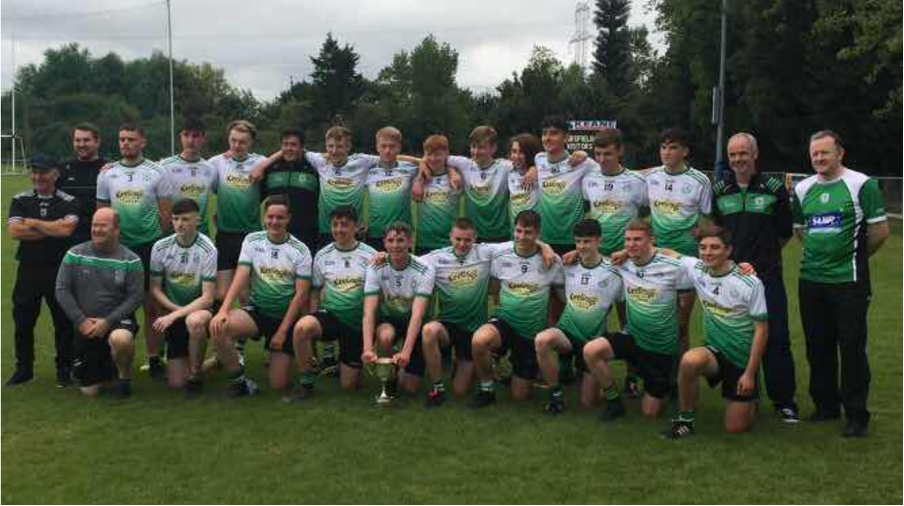 Congratulations to Lucan Sarsfields Minor B Hurlers, winners of the 2021 Division 4 Minor Hurling League, following the win over Kevins last Sunday, thanks to sponsor Keelings and also to Suir Engineering. Both our U16 Ladies Football teams got off to positive starts in the championship as did the 15A and 14A’s. For the first time on Monday evening, Lucan Sarsfields had four Minor Ladies Football teams in championship action, with good wins for the B’s and D’s. On Tuesday the Camogie Junior 3’s and 4’s both recorded wins. Well done also to Intermediate Ladies Football who finished their league campaign in mid table with a win over Ballinteer on Wednesday while the Junior A's made it 4 wins out of 4 in the division 7 league.

The Dublin Senior Hurling Championship gets underway on this Sunday, September 5th when Lucan take on Setanta at 2pm in O’Toole Park. Best of Luck to all

Best of Luck to the Dublin Ladies Football senior team and our own Paul Casey and Abby Shiels in the All Ireland Final as the Dubs bid for 5-in-a-row against Meath on Sunday.

Commiserations to John O’Connell and the Dublin Minor Camogie team who were pipped at the post by Cork in the Tesco All-Ireland Camogie Semi-Finals, and to our six representatives, Millie Reid, Sinead Daly, Phoebe Shannon, Hannah Gibbs, Clíodhna Ní Bhuachalla, and Sophie McIntyre.

A message from SDCC

Please note that the carpark at Griffeen park is closed for upgrading and expanding as part of the construction of the new Lucan swimming pool. I wish to remind you that no club has permission to park cars or allow visiting teams park their cars on green open spaces or to inconvenience residents within the area.

The allocation of Pitches/Sporting Facilities Policy and Conditions clearly states the following; Where car parks have been provided, clubs must ensure that both their members and the visiting teams avail of these facilities. Where no car park is provided, clubs must ensure that all cars are parked so as to minimize inconvenience to adjoining residents and to avoid unnecessary complaints and nuisance to owners and occupiers of surrounding properties.   It will also be the responsibility of the club to ensure that visiting teams are fully aware of and respect the parking agreements.

Therre a a number of items of clothing: club tops, hoodies, etc., that were left behind after the recent summer camps. If you child is missing any of these items, please call up to the club and collect from the area outside the dressing rooms. 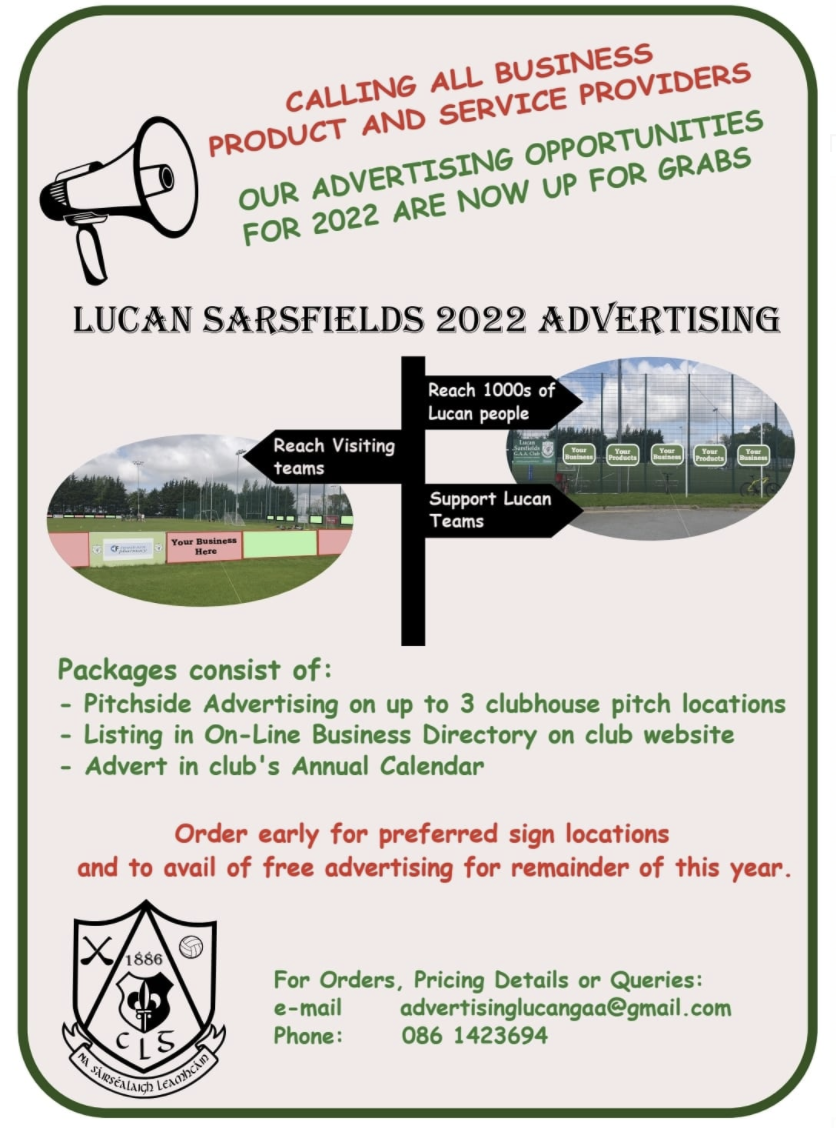 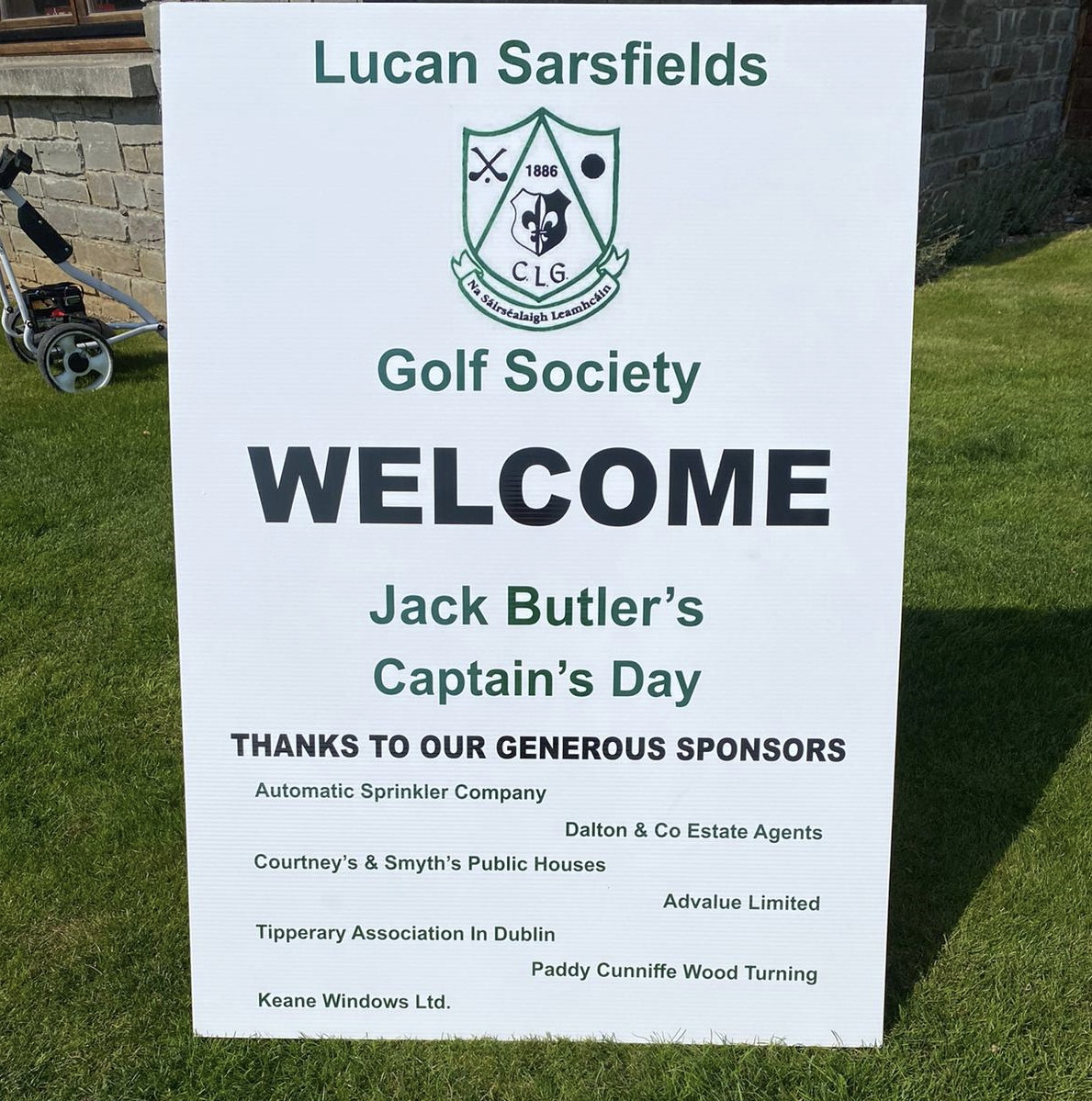 Results are as follows:

Celebrations / presentations will take place after our next (and last for 2021) outing in Millicent on Sat 25th Sept. (covid protocols permitting).

Golfer of the Year, - best 3 cards - (seriously hotting up now), will conclude in Millicent.

Many thanks again to all who played in Luttrellstown and congrats to all winners.

Looking forward to seeing you all in Millicent. 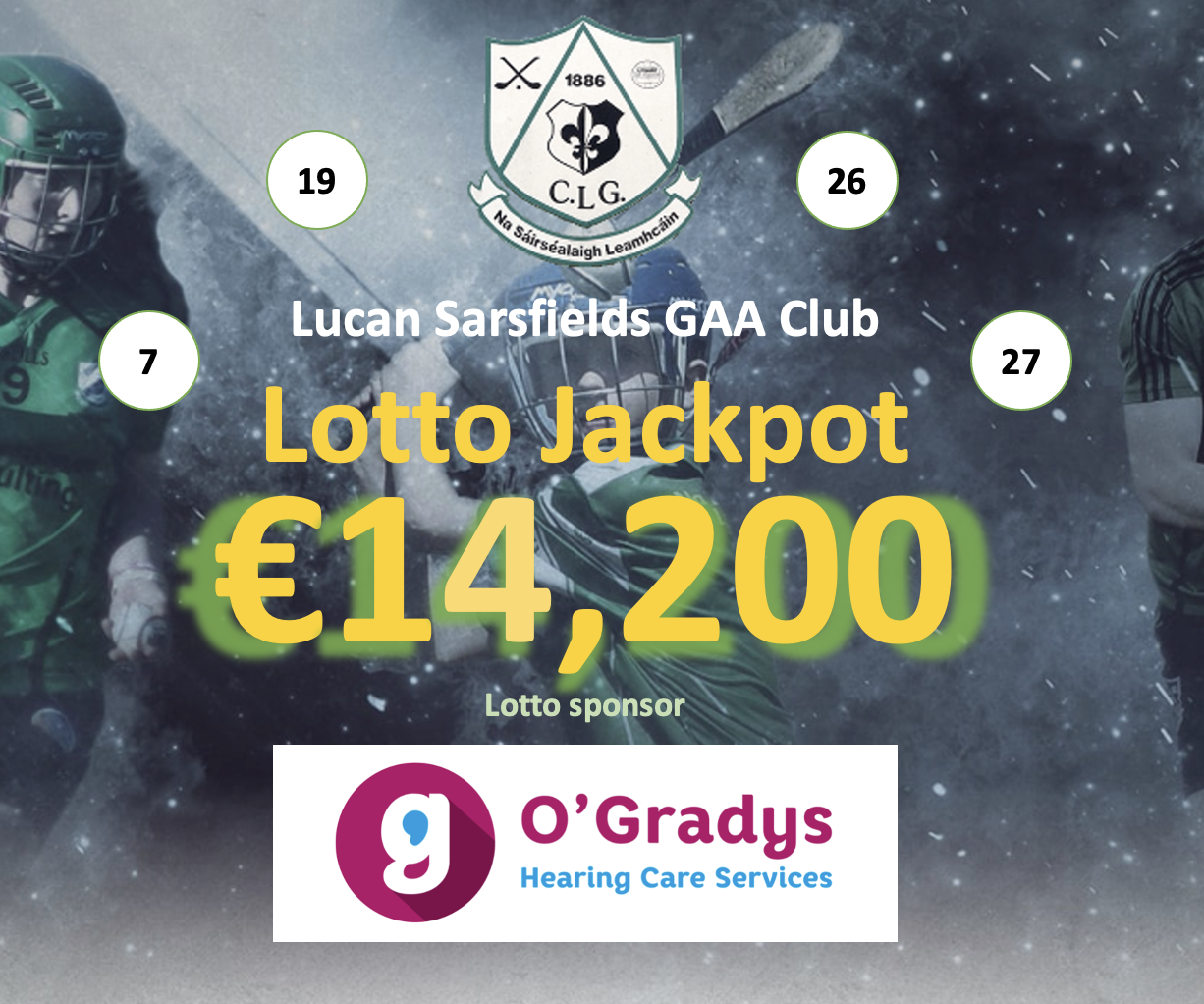 The Jackpot for the next draw, to be held on Thursday 9th September, is €14,200, and is sponsored by:

The draw, managed by Gerry McAndrew, will live streamed from the Clubhouse at 9pm to our Facebook page.

U16 Championship Division 7 Group B

U15 Football A Qualifying Gp.A

Lucan Minor B hurlers captured the league title in a very competitive and entertaining final win over Kevins at the 12th Lock on Sunday morning.  This game was closer than the final scoreline might suggest and was very much in the balance up to the final few minutes.  It was an excellent contest that swung one way and then the other several times over the hour, before Lucan finally got on top with two late goals.  Lucan had started well with a couple of early points but then Kevins got through for a goal and led 1-1 to 0-2 at the first water break.  Lucan turned the tide again in the second quarter helped by a great goal by full forward Neil O’Leary and some well taken points and were in front 1-7 to 1-3 at half time.

Fortunes changed again at the start of the second half when Kevins scored 1-3 without reply to lead by 2 after 40 minutes.  Lucan responded again with a nice point from Ross Campion and another goal from O’Leary to regain the lead.  Kevins responded with two quick scores to level the game 2-8 each going into the final quarter. Following a tense sos uisce for both sides, Kevins regained the lead before Lucan equalised again.  Then came a decisive moment when Ryan Brant got on the end of a Lucan delivery to flick to the Kevins net and put a goal between the teams.  A Kevins’ point in reply was cancelled out by good points from Neil O’Leary and Liam Farrell to put Lucan 4 ahead and looking nearly safe as the clock ticked towards the finish.  Then the matter was finally settled when a Deane Boylan free from about 50 yards deceived all before it and found its way to the net to put Lucan 7 clear and assured of victory.

The Lucan captain Conor Hannon accepted the cup on behalf of the team.  This was a deserved win for a team that went through the league unbeaten and played some very nice hurling allied with a high workrate and intensity.  It was very much a team performance with a very solid backline providing the platform for the forwards where full forward Neil O’Leary led the way with 2-2 from play.  Nine different players contributed to the scoring which shows the spread of ability throughout the team.

Sunday 29th August saw Lucan’s Minor B hurlers take on Kevins GAA in the Minor Hurling League Division 4 final. Lucan were looking to complete their league campaign unbeaten against a Kevins team that had pushed them to the pin of their collar in the earlier league meeting.

The match threw in at 11:00 on pitch 1 and took a couple of minutes to settle down with both teams trading early points. With Lucan ahead by a point, Kevins scored the first goal of the game to go 2 points up, Lucan responded well with a goal of their own from Neil O’Leary and points from Niall Higgins and Ross Campion to lead at half time 1-7 to 1-4.

The second half started with a resurgent Kevins scoring 4 unanswered points before Lucan got to grips with them again, the Half Back line of Liam Farrell, James Ryan and Connor Hannon started to impose themselves on the game, this lead to Lucan’s Midfield of Cian Ryan and Cillian Morrissey getting more ball and led to another goal from Neil O’Leary.

At the second water break the teams were level 2-8 to 2-8, and the league final looked like it could easily go to either side, the Lucan hurlers had other ideas though, in an outstanding 15 minutes Lucan outscored Kevins by 2-3 to 0-2, the goals coming from Ryan Brant and Deane Boylan. When the final whistle blew the score was Lucan 4-11 Kevins 2-10.

Team captain Connor Hannon accepted the trophy on behalf of the team in what was well deserved recognition of their unbeaten league campaign.

The U16B Ladies Footballers who won against St Monicas 7-3 to 6-4 on Sunday,