The first Sunday in September, traditionally All-Ireland final day,  was all about the Club this year as the Dublin Hurling Championships reached the semi-final stage.

Lucan had three teams in semi-finals and a fourth looking to secure a place at that stage. It proved to be a day of mixed fortunes with a great morning followed by disappointment in the afternoon. Top of the bill was the Senior semi-final against Cuala in Parnell Park. Unfortunately, despite a very competitive performance, our lads lost out to the defending champions and conclude their campaign for this year. It was a year of considerable progress for what is a relatively young team and the potential is certainly there to make further progress in the coming years. Earlier in the day, our Junior A’s and Junior B’s both secured a place in their respective championship finals with narrow wins over Realt Dearg and Faughs respectively. Those finals are scheduled to take place on the weekend of September 19th/20th. And finally, our Junior C’s lost out to Ballyboden in their final group game which was effectively a decider for a semi-final place; They now revert to the Cup Competition.

The footballers are also in action again in cup competitions this weekend, Seniors and Inters at home on Saturday, and the Junior A at home and B away on Sunday.

In Minor Ladies football, the first and second teams suffered home defeats on Monday evening, while the third team recorded a win. The Intermediates are at home to O’Dwyers on Wednesday evening while the Juniors travel to Wanderers.

The Camogie Intermediates will play on Thursday away to CBC/Portobello in round 5 of the championship. 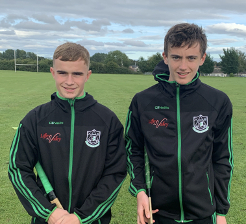 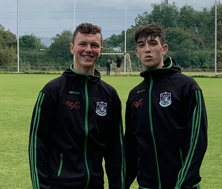 The 12th Lock Café opening hours 6-9pm Monday to Friday and 9:30am to 1:30pm on Saturday. These times may change in line with Covid-19 guidelines. Now on sale: Club Midi Socks!

The next draw will be for €3800 is sponsored by John Ryan, Accountant, and will be streamed ‘Live’ on our Facebook Page on Thursday 10th September.

You can enter the draw by clicking http://bit.ly/LucanSarsfieldsClubLotto before 6pm on Thursday. If you have, or are involved in, a local business and would like to build an association with Lucan Sarsfields GAA Club through sponsoring the Lotto, we would be delighted to hear from you.  Please contact Seamus Clandillon at 087 2189960.

If you have Match reports and articles for inclusion in the weekly Lucan Sarsfields GAA Club Notes, please email them to lucansarsfieldspro@gmail.com before 9pm on Monday Evening

U16 Hurling A Championship Semi-final, Lucan Sarsfields 1-12, Faughs A 2-4

The U9 girls played their first away camogie match on Sunday morning. It's lovely to see the girls putting into practice what they are learning at training and praising each other during the matches. The mentors would like to thank all our parents for all the support and kindness especially during the Covid restrictions. It’s great to have such a lovely group to work with. 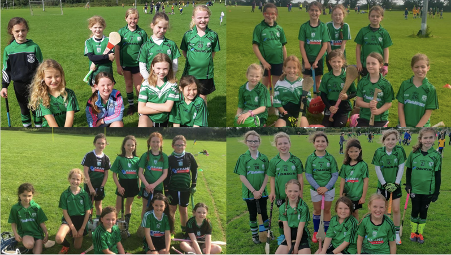 Lucan Junior A’s advance to the Championship final by the narrowest of margins after a nervous finish to this semi-final at the 12th Lock.  Lucan looked the better team for most of the game and led by six points at half-time and held that same advantage to the second water break.  However, Realt Dearg made a valiant late effort and a goal deep into injury time gave them a moment of hope that was quickly dashed by the final whistle as Lucan hung on for a deserved victory.  Lucan should not have been in this position as they had the upper hand for most of the game but hadn’t created the goal chances to put their opponents away.  They led 0-13 to 0-7 after a very good first half performance and extended the lead early in the second half.  Realt Dearg never gave up though and to their credit they were still in with a chance in the final moments.   This was a very solid all-round team performance from Lucan but it was the experienced players that build the platform for victory with Fintan Clandillon in goals finding his puck out targets consistently, Barry Aird and Niall Gleeson running the show in the middle of the field and Kevin O’Reilly, with the radar adjusted correctly this week, in outstanding form in the forwards with a 12 point total (0-7 from play).  The younger legs played their part too with Anto McNulty outstanding in the Lucan half-back line, David Kavanagh lively as ever in the forwards, and substitutes Colm Behan and Eiven Dowling made a big impression when introduced in the second half.

Lucan Junior B’s, who won the Junior ‘D’ Championship last year, now progress to the Junior ‘C’ championship final after this hard fought win over Faughs behind the closed doors of AGP3 on Sunday morning.  Lucan had defeated Faughs comfortably in the group stages but the visitors came with some reinforcements this time round and proved a much sterner test.  The exchanges were very tight throughout with Faughs leading 0-5 to 0-4 at the first water break and the sides level at 1-8 each at half time.  Lucan edged ahead in the second half to lead 1-11 to 1-9 at the second water break and held on to win by 3 in the end.  The narrow confines of the pitch meant space was hard to come by and it was a tough physical battle for the most part.  Lucan’s defence benefitted hugely from the experience of players like Kevin Roche, James Mullins and Ian Fitzgerald and they had enough class in forwards like Ciaran Keane and Evan Lombard to get the scores to secure a deserved victory.  Overall it was a very good team performance against a seasoned opposition and the strength in depth in the panel was further evident by the strong contribution of the subs introduced in the second half.

Lucan's third junior team played their final group game against Ballyboden needing a win to progress to the championship semi-final. Scores were hard to come by at the start as both teams took time to click. Although Charlie Casely and Jack McCarthy both levelled up for Lucan as the game settled down, Boden took control of the scoreboard and scored 1-4 without reply. In contrast, Lucan hit the post twice, dropped a few balls short and hit some wides. Lucan finished the half stronger with two more scores from Casely, another from McCarthy and a Liam O'Connor free to leave the score at 1-8 to 0-6 at half time.

Paddy Kennedy opened the scoring after the break but Boden clawed out three themselves to lead by seven at the second water break. Boden's greater experience and craft saw them home in the final quarter. Although Lucan pressed well and kept their workrate high, Boden had the capacity to break and pick off scores to relieve the pressure. McCarthy added another point as did O'Connor from a placed ball. Kennedy eventually found the net in the final quarter but Boden also tacked on a second goal plus a number of points to see the game out.  Even though most of the Boden team were of a more mature vintage, the experience gained winning senior titles and playing for Dublin was used to telling effect.  The game finished on a scoreline of Lucan 1-9, Ballyboden 2-16.