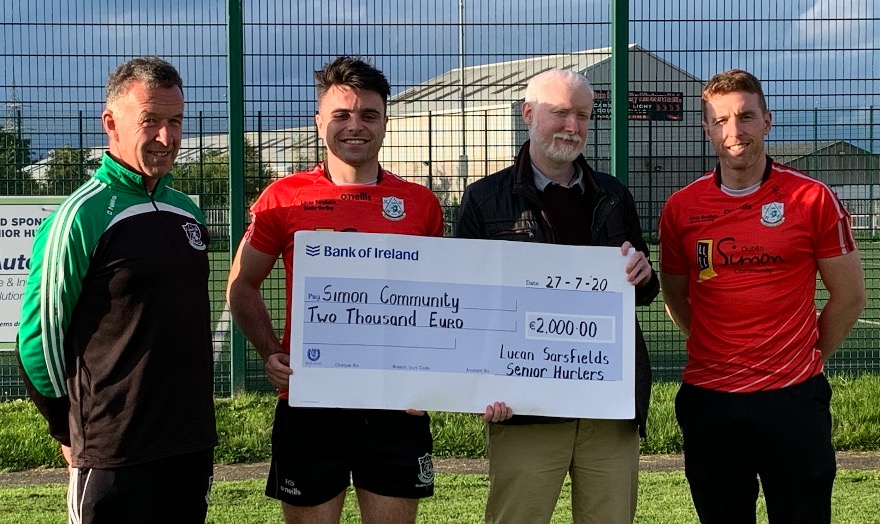 Monday evening saw the Senior Hurling team present a cheque for €2000 to Steven Short from the Simon Community. Bernard Crowley organised the fundraiser in return for a new set of training tops for the team modelled here by Ronan Smith and Johnny McCaffrey!

The Skills Masterclasses took place during the week, the Camogie on on Tuesday, facilitated by Club GPO David Moran and assisted by Laura Quinn, Senior Camogie and Ronan Smith, Senior Hurling. 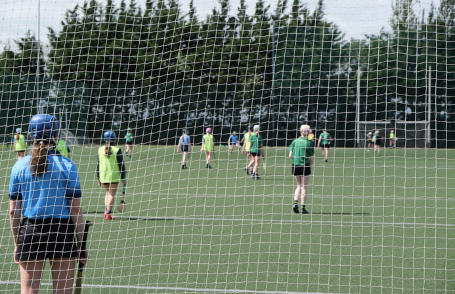 Fixtures for the coming week:

Junior 3 Camogie Cup – away to Commercials

U16 Hurling A Championship – away to St Judes

Found on AGP1 – A pair of wireless Apple Ear Pods – if you are the owner, send an email with your contact details and the serial number, and/or screenshot of the pairing to lucansarsfieldspro@gmail.com.

A pair of Childs Spectacles (Kylie Minogue brand) have been handed in to the 12th Lock Café, and are awaiting collection by the owner!

Lucan Sarsfields Lotto Jackpot €1400: There was no winner of the Lotto Jackpot sponsored by Clandillon Motors, held on Thursday 30th July, 2020.

The numbers drawn were 2, 13, 14 and 21. The five Lucky Dip winners of €30 each are, Maeve McGuire, Peter Farrell, Brian Mahon, Darren & Isobel and Anthony Doody

Next weeks’ draw is for €1800 and is sponsored by Dual Printing and managed by Diarmuid Dawson, and will be held behind closed doors on Thursday 6th August.

Our three minor teams commenced their championship campaigns on Sunday morning.  This was the first time we fielded three teams in minor hurling championships, and thanks to very good co-operation between mentors and flexibility by players, we fielded three competitive teams.  All had away fixtures and the outcome was two wins from three – match reports below.   Looking ahead, there is a full round of adult championship fixtures mid-week with the Junior As (away to Parnells) and Junior Bs (home to Faughs) in action on Tuesday night, the Seniors travel to Marin Savage Park to play Oliver Pluntetts on Wednesday night and the Junior Cs at home to Stars of Erin on Thursday night.  All games throw in at 7.30.

Finally this squad of players got to play together competitively after having their league games rained off back before the break.  The lads knew exactly what was required of them and to the last man, they met it straight on.

Charlie Keher began the game at right half forward and was causing all sorts of headaches for the Thomas Davis defence.   Our backs stood tall, and really grew into the game. The midfield pairing were always on top, and always an outlet for the defence.   Our forwards never gave up on ball, putting pressure on every attempted clearance and forcing turnovers in our favour. We struggled at times to find the posts, but that didn't stop the Lucan lads firing ball after ball at the Thomas Davis goal. Matt Coogan finally finishing a ball to the opposition net which was just reward for all the hard work.  Half time score; Lucan 1 -11  T Davis  0-6.

Second half started as first had finished, with ferocious work rate, battling and turning over the ball.  The lads continued to clip ball over the bar, before mid way through the second half, Walshie buried a penalty, which really ended the game as a contest.  Maximum amount of players were introduced in the second half to give them a taste of the action. A good start, but nothing achieved yet as they say !!

Lucan ended up with a comfortable win away in Collinstown where both teams battled against a strong cross-wind. The contest started evenly with Na Fianna countering a Brendan Kavanagh opening point. Goal chances followed which set the tone for the game. The excellent Cathal Doody advanced well off his line to body-block a goal-bound Na Fianna strike. At the other end, however Josh Brant placed his strike across the keeper and found the net to give Lucan an early lead. Following a scored free each, Kavanagh again popped up to raise Lucan's second green flag to give Lucan a grip on the game. Dean Boylan proved accurate from placed balls before surprising everyone with a low, well struck free that also found the net shortly before the interval to give Lucan a 3-4 to 0-7 lead.
Cathal Doody turned scorer after the interval when the keeper converted a long-rang free. Boylan tagged on three further frees before Na Fianna stepped up and scored 1-3 from frees themselves to shade the third quarter and close the gap to five points. After the water-break, in a mirror of the opening sequences, Shane Coffey found the net before Doody again saved - this time low to his right. Lucan extended their lead in the closing sequences with another Kavanagh goal, some more converted placed balls from Boylan and two scores from Adam White
Doody was prominent in goals at key moments and was well protected by Pearse Farrell at the edge of the square. Kavanagh was dynamic in the middle of the field and the Lucan forwards were balanced and exhibited good hands under the high ball.

Sunday morning saw Lucan Sarsfields field a Minor C Hurling team in the Championship  for the 1st time, the opposition for the 1st round of the Minor D Championship were Castleknock GAA in Porterstown.

The Lucan side made a solid start to the game matching Castleknock point for point in the opening minutes, with a good point from Connor Cooper the pick of the early scores, an early goal for Castleknock brought a reply of a point from Lucan and some good pressure that failed to yield a score. At the other end Luke O’Neill made a couple of good saves to keep Castleknock from further extending their lead.  At the first half water break, Lucan were trailing by 2 points but well in the game. Some very good defending from Robert Hazley, Conal Morris and Cian McCormack helping  keep Lucan in touch with Castleknock.  A goal late in the 1st half from Lorcan O’Reilly kept Lucan in the fight at halftime. Lucan were trailing by 5 points at halftime.

The second half led to a few switches of position and for the first 10 minutes of the 2nd half it was a very even game with scores being traded but Castleknock maintaining their 5 to 6 point lead. Some notable passages of play involving Jack Kelly, James Goulding and James Ryan who more than matched their opponents.  With the second half water break out of the way Lucan needed to push on for a goal and forced some good chances going close from Noah O’Kelly and Lorcan O’Reilly again, the goal eventually came from Ryan Fahy but at this stage Lucan were trailing by 9 points. The Lucan lads kept pushing and trying to grab the goals that they needed to get back into contention.

Unfortunately the first appearance of a Minor C team ended in a defeat 2-10 to 2-6, in what was a very competitive first outing in the championship. The lads fought and scrapped away till the very end and while disappointed with the result can be very proud of the effort put in.