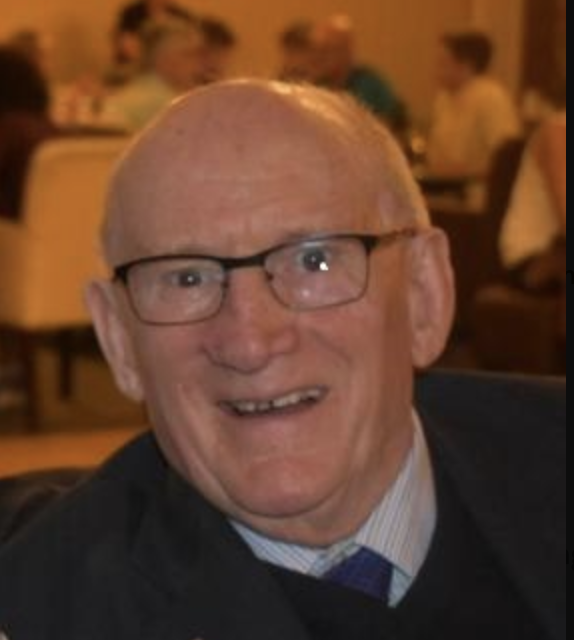 This edition of Club Notes is dedicated to the memory of Jim McCarthy.

It is with great sadness that we learned this week of the death of Jim McCarthy, a longstanding member of Lucan Sarsfields GAA Club, and our community has lost one of nature’s true gentlemen. Very proud of his Wexford roots, Jim nevertheless gave everything to his new home in Lucan, and especially so to Lucan Sarsfields GAA Club. Many the young lad in Lucan got his love of Gaelic football from Jim, including players who went on to wear the blue of Dublin at the highest level.

Jim’s dedication to the teams that he managed was legendary and indeed ahead of his time. In the days before social media, it was quite common for players to find Jim’s handwritten notes in their letterbox in the early morning, setting out the venue and time of the next game and even directions to the ground! He emphasised the need for everyone to get to the right venue on time, so there was often a convoy across the M50 with Jim at the front doing 80km an hour and a few frustrated lads following. Maybe that was his technique to get them fired up for the games.

He understood the value in having a strong and united management team with him, and Mick Casey, Cormac Gordon, Frankie Farrell and Dermot Russell were his trusted allies. With this management team, and with an emphasis on the development of young players, it was no surprise at all, but still a remarkable achievement, when Jim’s Junior B team won the double of league and championship in the 2001 season. 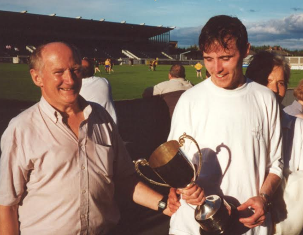 Jim, Kevin and Elizabeth with the Junior B Cup in 2001

Jim was a family man through and through, and very proud but never vain about their achievements. He was a very kind and gentle man, but he also had great strength of character and a positive outlook. We remember how he and Elizabeth handled with great dignity their enormous grief at the untimely death of their son Fintan and his partner Sonya Rabbitte.

Jim built up great relationships with his players. Perhaps his strongest trait however was his ability to connect with his players at a personal level which often led to him going above and beyond for the betterment and wellbeing of the team collectively and individually.

These relationships inspired a loyalty that has stood the test of time and he was always delighted to chat with the players about the old days and the mutual enjoyment that they shared, and indeed these players themselves warmly welcomed their interactions with Jim.

Jim gave a huge commitment to Lucan Sarsfields over a long period of time. He was a great contributor to Christmas Draw fund-raising and drove on his team to deliver big performances just the same as on the field of play. Similarly with the Club Lotto, where he strongly pushed ticket sales and was a member of a Lotto management team until quite recently. Indeed, Lucan Sarsfields recognised Jim’s ongoing and exceptional contribution with its highest awards - a Club Person of the Year Award, and a Hall of Fame Award in 2004. 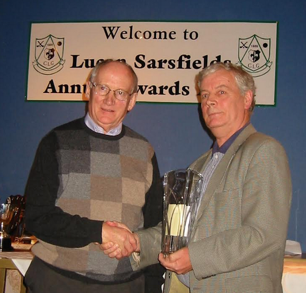 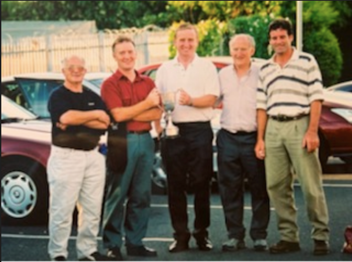 Jim was a true gentleman and a real club man. He was the heart and soul of the Junior B’s footballers, keeping us all on our toes. He always made sure we were organized, kitted out and turned up on time and always managed to field a team, which was never an easy task, but Jim managed it.

We could all see that he genuinely loved the club and the game. We were privileged that he gave of his time and expertise and enabled us to succeed, culminating in winning the Junior B football Championship in 2001.

Himself, Frankie and Mick were the Three Musketeers, the beating heart of the team. Newcomers were openly welcomed, and everyone got a chance. Lifelong friendships were formed, and treasured memories made. 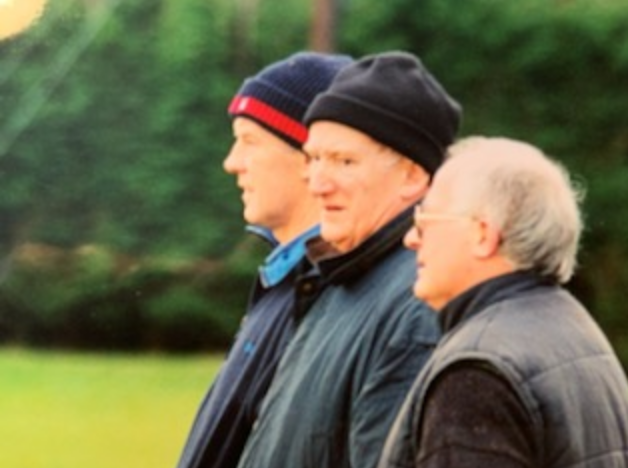 While the final whistle has blown for Jim here on earth, I am sure he is busy putting order on things in heaven.

May He Rest in Peace.

I had the pleasure of playing on Jim’s great Junior Football Team for over a decade. It was a fabulous period of time over which I got to know Jim, and see him transcend the role of football manager into something much more and to see him touch and influence the lives of so many people. On his sad passing, I wanted to share some of my personal experiences of Jim over that time to acknowledge his immense contribution and dedication to that great Team.

I joined Jim’s team straight out of Minor. Jim wanted to make sure that young lads coming out of the underage set up continued to play football, so I got the call. My earliest memories of that time were the handwritten notes dropped in the door on a Thursday, with precise details of the fixture on the coming Sunday. Jim would travel around and drop the notes into the individual houses, a job in itself. We were playing in the lower divisions of Junior Football, not the most glamorous of places, but Jim’s dedication and attention to detail was evident from the start.  Away games were an adventure. We played in far flung places like Oldtown, Garristown, Ballyboughal and the like. We saw parts of North County Dublin that we never saw before, and Jim made sure we all knew where we were going, often travelling in convoy across back roads with Jim at the helm, well below the speed limit. When once we played a game in the middle of nowhere, I asked Jim how on earth he found this pitch. Jim answered with a wink, “Sure I drove out here yesterday just to make sure I could find it”. It was something he done often. Before Sat Nav and google maps, Jim travelled to venues in the days prior to matches to make sure we got there on the day.

At that level of football, it was hard at times to field a team. If the opposition sometimes tried to play a few ineligible players, Jim would let the management know in no uncertain terms that he had a camera and would take a picture of the suspicious player! Jim always prided himself at having at least 15 lads togged out on the day, even if on one or two occasions, the father of a player took to the field.

In the early days, we didn’t win too many games, and were often on the receiving end of a few bad beatings. Not that that mattered too much to Jim. His first words coming off the field were always the same, “Well done lads”. It was all about taking part. Everyone got a run, no-one was left out. Over time, as Lucan started to grow in size, new players came along. Jim had a great knack of attracting newcomers to the team. He was most welcoming and many have spoken of how it was Jim who was crucial in integrating new residents into the GAA community in Lucan. He had time for everyone and always had a chat with the wives and girlfriends who started coming to the matches.

The team started to evolve and with new players, it started to become a talented team. We always had spirit, but a new belief came with improved skill levels. The young blood kept coming and some players who went on to represent the club and indeed the county, at the highest level, started their adult playing careers with Jim. This was something he was immensely proud of. The truth was that young players wanted to play on that team. They could see we had something special. In the same way that Jim could attract players, he built a great management team around him. This brought things up a level and we started to really compete. A few good championship campaigns came along but we always seemed to fall that bit short. But Jim kept at it and we hit a golden patch where we went unbeaten for nearly two years! We won back to back Junior League titles, Cup competitions and ultimately won the Junior B Championship title in 2001. I remember the ovation that Jim got as he walked into the clubhouse for the celebrations that night, it was well deserved and a long time coming. Jim was beaming from ear to ear for the whole night!

Jim’s commitment to the Team went far deeper than the field of play however. Over time, lads would go through tough periods in their lives and suffered personal loss. Jim was so supportive to lads during that period, going over and above the call of duty to make sure lads were ok and got the support they needed. That was a special team and a special period of time. There was a unique bond amongst those who came in and out of that team. Lifelong friendships were made and many have spoken of the fondest of memories and the love of Gaelic Football that was nurtured over that time. That bond, that culture, that comradery came from the top, it permeated from Jim. I refer to that team as a truly GREAT team, not because of the trophies and the medals we won, but for what we all gained personally from being part of it. It shaped many of our adult lives and Jim was ultimately responsible for that, so on the occasion of his terribly sad passing, on behalf of all of those who had the pleasure of putting on a jersey that Jim McCarthy handed them, Thanks Jim, for everything.

GAA Club Newsletter for April 2020 which contains a range of information for club members at administrator, volunteer, coach and player levels.

Lucan Sarsfields Senior football team will run from Sunrise May 2nd to Sunrise May 3rd to raise some much needed funds for the #DoitforDan campaign and Cystic Fibrosis Ireland. All donations will go towards these 2 charities. They will all run a minimum of two hours over the course of the day in pairs all within our 2 km radius and keeping to social distancing between the runners. They will be running for 24 hours consecutively as a team. You can donate online by following this link.

There was no winner of the Lotto Jackpot sponsored by Henley Forktrucks, held on Thursday 30th April, 2020, The numbers drawn were 7, 13, 24 and 25. Lucky Dip winners (€30): Padraig O'Driscoll, Declan Healy, Anthony Lee, Paul McCabe and Gerry & Mary Reynolds, all of whom will be contacted so that they know how to claim their prize. Next Draw: Thursday, May 7, 2020, Sponsor: Diamond and Gem Jewellers, Managed by Team Flannery, Mary on Admin, Cameraman Donal and MC Tom.

IMPORTANT: For the duration of the current restrictions due to the COVID-19 outbreak the lotto draw will take place on Thursday nights @ 9pm behind closed doors and will be live streamed on Facebook. You can still enter the draw by clicking on the following link: http://bit.ly/LucanSarsfieldsClubLotto. Make sure to get your entry in before 6pm on Thursday to be included in that night's draw. These are very challenging times, Thank You for supporting your club in this way.