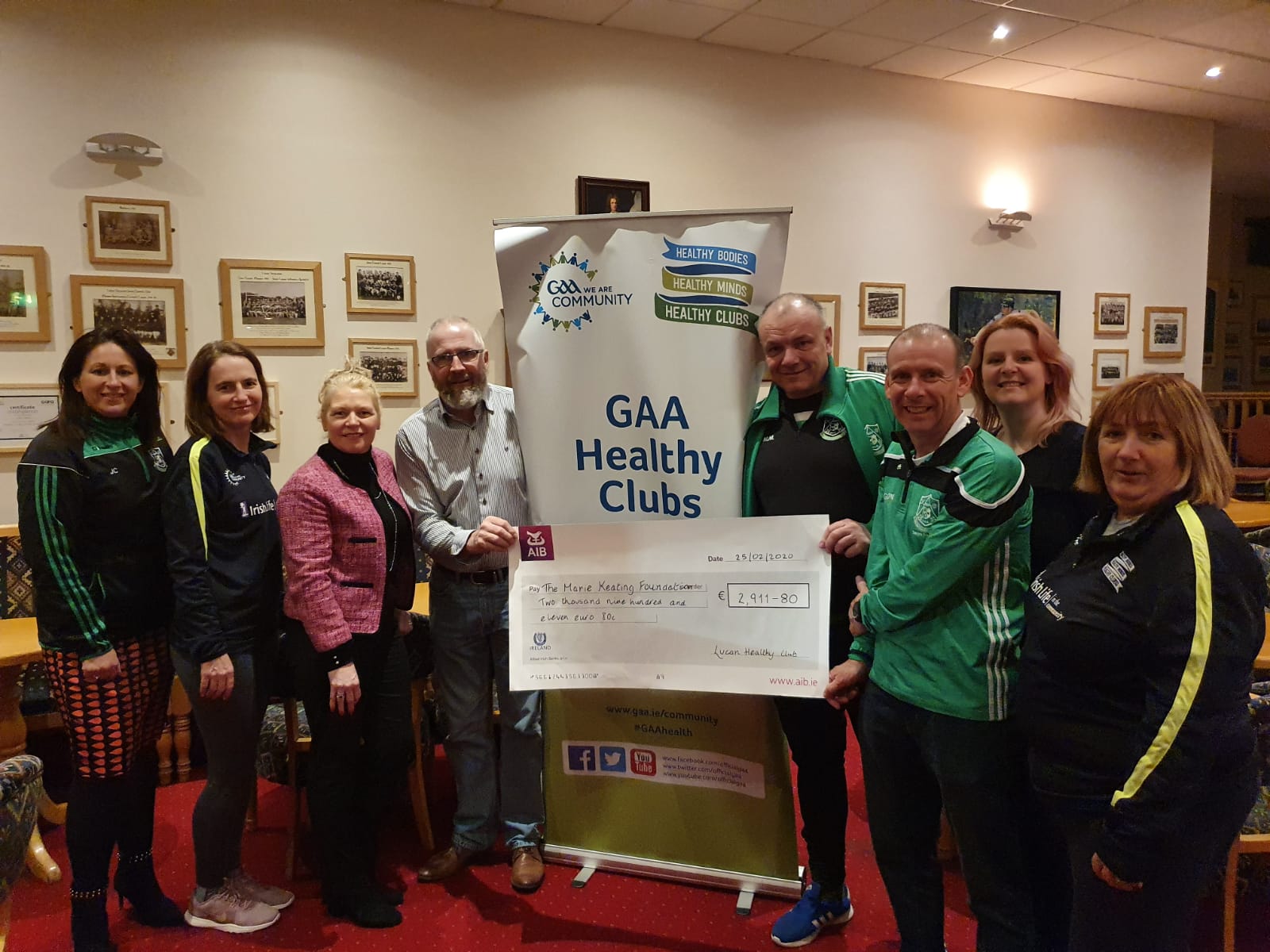 On another weekend where the wet weather forced the postponement of some games, there was still plenty of action at Club and County level for Lucan Sarsfields.

The Junior A Hurlers were away to Ballinteer St Johns and scored 2-13, all from play to win by 6 points (Ballinteer St Johns 1-10. Lucan Sarsfields 2-13). Two of the Minor Football games went ahead, the A’s winning at home to Plunkets, and the B’s winning away at Vincents. Meanwhile the Camogie Minors had a mixed start to their league campaign, the A’s winning by 9 points against Kilmacud and the B’s losing by 2 points at St Maurs.

At Juvenile Level, in Football there was a win for the U16A in Malahide, but the U14B lost at home to Clan na Gael, and the U13C played at home against De La Salle in a grading game. There was a U12 Hurling Blitz on Saturday, and both Camogie U13 teams recorded wins. Congrats to all and match reports below.

At County Level on Saturday, in the Leinster U20 Semi-Final at Parnell Park, Alan Murphy and Mark Lavin (who picked off two scores in the first half) were the Lucan representatives as the Dubs progressed to the Leinster Final against Laois on Friday 6 March. Also on Saturday, in the opening (very stop-start) game at Croke Park, Dublin were pipped at the post by Wexford in the Division 1b Hurling League. Although Wexford were 2 men down, Dublin’s numerical advantage on the pitch was nullified with the injury to Chris Crummey (0-1).  We wish him a speedy recovery.

In Camogie, Seniors Emma Flanagan and Laura Quinn, and Intermediates Claire Rigney, Aoife McKearney and Chloe O’Connor were on county duty, but unfortunately the Dubs suffered a double blow, the Seniors losing to Tipperary and the Inters to Antrim.

The Ladies Football leagues get underway this weekend, and all adult and juvenile fixtures for the four codes are on the website, see www.lucansarsfields.ie for details.

Our sincere condolences to Neil, (Intermediate Ladies Football Management) Orlaith and Aoife (Adult Ladies Football) and the McKelvey family on the passing of Neil’s Sister, Kitty (Ward) on Saturday 15 February and also on the recent passing of his brother Jimmy in November 2019. May they Rest in Peace.

Condolences also to the Clandillon family as the death has occurred of Aine Mac Mathúna, mother of Niamh, mother-in-law of Seamus and grandmother of Senan, Tadhg, Fachtna and Fintan. May she rest in peace.

Lucan Healthy Clubs in conjunction with the GAA Healthy Club Project, have a few events on for Dubs Healthy Week 2020, the first, on March 3 at 7:30pm, is a Health and Wellbeing talk in the Clubhouse by David Cryan, one of the 2019 Operation Transformation Leaders, free admission. Then on Thursday March 5 at 7:30pm, Repak will give a short talk on recycling, again free admission. And finally, on Sunday March 8, the Senior Citizens Lunch 2020 will take place at the club between 1:30 and 3:30 pm. Tickets can be ordered from Dee on 087 918 3707 or by email to lucanhealthyclub@gmail.com.

Linda Keating from the Marie Keating Foundation was in the club on Tuesday to accept a cheque for €2911 from the Healthy Club 'Moustaches and Music' night. Thanks again to everyone who participated in raising a fantastic amount.

Seachtain na Gaeilge 1-17 Márta, see the new website www.snag.ie. Comhaltas Lucan are having a table quiz in the function room at 8pm on Saturday 7 March. Entry only €40 per table of four, all proceeds to Dublin Fleadh 2020. Seisiún Ceoil after quiz!

On Easter Sunday night, from 8pm April 12,  fresh from Vicar Street, Colm Kavanagh performs The Legend Of Luke Kelly – Dubliner in the function room, tickets priced at €20 each are available via the App, online or at the Club Bar.

Club Lotto Jackpot stands at €20,000: There was no winner of the Lotto Jackpot held on 20th February 2020. The numbers drawn were 15, 19, 23 and 28. Lucky Dip winners (€30) Gary Coleman, Joe Groark, Bernadette O'Brien, Michael and Joan Molloy and Caitriona Conway. The next draw will be Thursday 27th February 2020. Sponsor: Dual Printing Ltd and managed by Gerry McAndrew. Play Online or tickets can be purchased at the Club, 12th Lock Cafe or in Kenny’s Vesey Arms, Lucan. Cut off time for Online Entries is 6pm every Thursday.

Only one of our games survived the weather this weekend and it provided a good start to the year as Lucan Junior A's defeated Ballinteer by 6 points to capture valuable league points. It's not often that you win a hurling game without scoring a free but that was the case here as all Lucan's scores came from play. Lucan played against a stiff breeze in the opening half and hurled quite well but a combination of misfortune and poor finishing meant they failed to reflect their advantage on the score board, and Ballinteer led by 2pts at half time, 0-6 to 0-4. Ballinteer got a goal at the start of the second half to open a 5 point lead but Lucan responded well and Kevin O'Reilly goaled soon after to reduce the deficit again. It was tit for tat for a while before a second O'Reilly goal put Lucan ahead for the first time with about 10 minutes to go, and they drove on from there adding some great scores in the final minutes to win comfortably in the end. Midfielder David Kavanagh and halfback Gavan Millea were outstanding for Lucan, while O'Reily took his goals well in a hardworking forward line, in which Rob Lambert and Dylan Kelly also picked off nice scores.

Many of the Juvenile football teams were back in grading leagues and league action proper this weekend but the weather again had an effect on the number of games being played. The U-13A grading league game versus Kilmacud Crokes was postponed due to a water logged pitch. However, both other U-13 grading league games took place.

Lucan boys u-13 hosted Ballyfermot on the AWP in a game that was switched from AGP2 due to SDCC declaring all grass pitches unplayable. This was the Lucan Boys first game in their grading league. Despite this the home team started the game at a furious pace pinning back their opponents and tacking on some nice scores. In this period the chief persecutor of the Ballyfermot defense, ably assisted by his fellow forwards was Killian O’ Connor. Up until half time, while not as prolific as the 1st quarter, the Lucan forwards kept the scores coming. As the half ticked into the 2nd quarter the Ballyfermot boys came into the match. It was during this quarter that the defensive unit had to work. The half back trio of Ciaran Moloney, Luis Healy, and Eoghan Clarke blocked, harried, tackled, and broke down Ballyfermot attacks. On breaking down these attacks the Lucan defensive team turned defensive into quick attack using the midfield duo of Kevin Doherty and Jack Andrews as the link with the forwards. The half ended with Ballyfermot DLS closing the gap on the scoreboard to a few scores. 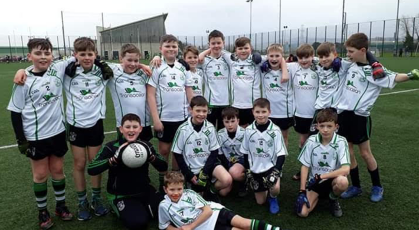 The second half was the reverse of the first half. With the wind on their backs and their tails up Ballyfermot peppered the full back line, seeking the leading score. Strong and calm defending saw Evan Doody, Riain Keegan, Callum Mitchell and Luke Keogh turn the tide in Lucan’s favour for the final quarter. Playing no small part Lucan’s goalkeeper, Evan Whelan was sharp to save several Ballyfermot chances. Finally, the forwards, Alexander Bollard, Killian O’Connor, Ben Fitzgearld, Adam Norman, Liam Mitchell, Robert Melvin, and Lucas Enright finished with a flourish ensuring that they all got their names on the score board, as did the midfielders. To keep the backs union pacified one back strayed up the field to score.

A stronger physical side won out a game which was still much a contest at half time. Lucan started well with Jack Keogh netting after 45 seconds from the throw in. Play switched from end to end with a wide at either end. Darragh Lester took his first point after put this previous shot narrowly wide. Joshua O Connor slotted over 2 points from play before St. Peregrines responded with a goal . Cian O’Gara slotted over a point from the left after Joshua O’Connor was dragged down just outside the 13 yard line. Alseny Bah who was just on the pitch found the net within a minute of the previous score. The play switched up the other end with the opposition scoring 2-01 before JP O Connor found the net for Lucan. JP and Cian Waterhouse followed up with two more scores. Half time Lucan 3-06 St. Peregrines 5-04. 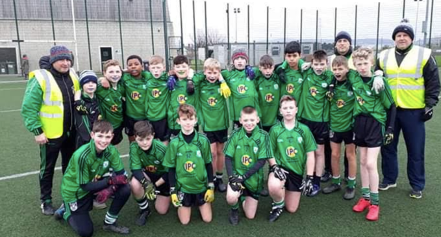 St. Peregrines found the net within two minutes of second half. Wides were exchanged at either end with the wind blowing directly across the pitch not making it easy to score. Cian O Gara pulled a free just wide and the opposition seem to pull away after that taking the next four scores. Cian Waterhouse and Patrick Cosgrove took Lucan’s only two scores in the second half which tells most of the story. When Lucan played well, they looked really good, putting together some nice passages of play.

JP O’ Connor scored 1-02 for his first start at half back, and along with Phelim Dunne in the centre and Patrick Cosgrove on the other wing, set up most of Lucan’s scores. Darragh Colfer and Angad covered a lot of ground around the middle and can be happy with their performances.

In the U-14 league Division 6 game, Lucan lost out to Clanna Gael Fontenoy. 1-02

in game of two halves dominated by a strong wind blowing down the pitch.

Well done to all the teams competing at the weekend.