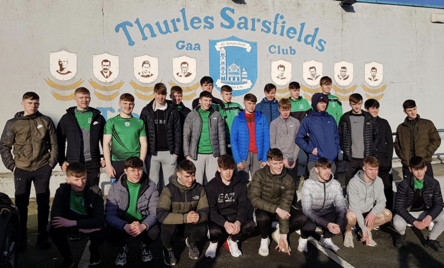 Congratulation to Alan Murphy and Mark Lavin, both on the Dublin U20 Football panel who overcame Laois on Saturday 2-10 to 1-10 in the John Kerins Football Development League. Mark was on the scoreboard for the Dubs in the drawn game against Kildare a week earlier.

Our Minor Hurlers took a ‘Trip-to-Tipp’ on Saturday 19th and played against Thurles Sarsfields Minors. Match report below.

New Football Rules 2020 came into effect at the start of the year. These apply to all levels of Gaelic Football. Referees have been issued with interpretation and implementation documents from Croke Park. It is important that all team officials and players are made aware of the rule changes. In summary, the advanced mark is introduced, the kickout mark is modified, the sin bin is introduced and the kickout is now to be taken from the centre of the 20m line.

For players, the important things to note are: Mark – kickout or advanced, the referee awards the mark by blowing the whistle, to accept the mark, the player who caught the ball must now raise his arm, failing to raise the arm will allow him to be tackled immediately. The player who claims the mark must take the free himself and from the hands, within 15 seconds. Opposition players must retreat 13m, failure to do so will result in a free 13m in a more advantageous position and as it is now a free, can be taken by any player from the hands or off the ground.

Advanced Mark, The Referee shall now award a Mark by blowing his whistle: When a player catches the ball cleanly on or inside a 45m line from a kick in play, (i.e. not from set-play) delivered by an attacking player on or beyond the opposing team’s 45m line, that travels at least 20m and without it touching the ground.

Kick- Out Mark: The Kick-Out Mark continues as before for clean catches from a Kick Out on or beyond the 45m line, with the changes above.

SIN BIN: To order off, for ten minutes in a Sin-Bin, a player who commits a Cynical Behaviour Foul/Infraction by taking his name and showing him a Black Card, provided the player has not committed a Cautionable Infraction (Yellow Card) previously in the game. If on resuming play, the player commits a further Cynical Behaviour Foul/Infraction, he shall be ordered off by showing him a Black Card, followed by a Red Card.

The time period in the Sin-Bin shall be of 10 minutes duration, irrespective of delays. The ten minutes shall traverse normal time (which includes additional time) and Extra Time, if played.

Kickout from 20m Line: The kick out must now be taken from the CENTRE POINT of the 20m line (not from anywhere within the large rectangle) AND SHALL BE KICKED FORWARD. All players except the goalkeeper and the player taking the kick (if other than the goalkeeper) shall be outside the 20m line, outside the semi-circular arc and 13m from the ball until it has been kicked.

An explanation document has been forwarded to team Managers and Mentors.

Wanted: We are looking for someone to take on the role of insurance claims administrator. Full handover and support will be given. Anyone interested to contact Club Secretary, Jo Mahon, by email secretary.lucansarsfields.dublin@gaa.ie

Adult Hurling: Having considered the numbers of adult hurling players in the club and the numbers coming through from minor level, we have decided to enter an additional adult hurling team this year. We will now have 4 teams competing in the Dublin adult hurling leagues and championships. If there are any former players, or any hurlers in the area that have not played with Lucan Sarsfields previously, who might like to come back to the game and get involved with this fourth team, we would be delighted to hear from you. Open to all ages from 18 upwards, and to “social” hurlers as well as more committed players.

Also, if anyone might be interested in getting involved with the running of the team, please let us know. All enquiries to Directors of Hurling Vincent O’Connor (087 2075835) or Paul Stapleton (087 2058572).

Adult football and hurling re-grading for championship games only is open until 31st January, after which applications will not be accepted. Please complete the correct official form available from team management, sign it and ensure it is also signed by the club secretary before submission.

Our deepest condolences to John and Colette Condon and family on the loss of Johns sister, Mary. John lost his sister Noreen earlier this month. May she rest in peace.

January Special Offer: Wear your GAA jersey on the Croke Park Stadium Tour this January and get your tour ticket half price! Adults, children, seniors, students and families can avail of this fantastic offer when they proudly sport their GAA club, county or Kellogg’s Cúl Camp jerseys. For more information visit www.crokepark.ie/jerseyjanuary.

Annual Hurling Quiz 2020. This will take place on Friday 31st January from 8pm. Entry cost for a team of four is €40, Raffle on the night with prizes galore.

The Adult awards night will take place on Saturday 1st February. Nominations for Club Person of the year are to be be submitted to Club Secretary, Jo Mahon via email to secretary.lucansarsfields.dublin@gaa.ie before Tuesday 28th January

Volunteers Night took place on Saturday 18th January, many thanks to the organisers, a great evening was had by all.

Club Lotto Now at €20K: There was no winner of the €19,800 Lotto on 16th January. The numbers drawn were 1, 15, 17 and 25. The Lotto Jackpot of €20,000 to be held on January 23rd will be run by Mary Flannery and sponsored by Coláiste Laichtín, Inis Oírr. Lucky Dip winners (€30) Paul Gogarty, Margaret Byrne, McGarrigle Family, Noel Flynn and Michael McAndrew. Play Online via the website, or tickets can be purchased at the Club, Kenny’s of Lucan or Vesey Arms.

On Saturday 19th January, our Minor A Hurlers made the trip to Tipp to play Thurles Sarsfields on their home pitch. Leaving the club by bus on Saturday morning, Boxer and Boiler decided to drive themselves so they could take in all the sights while in God's country. Boiler in particular was very excited about the trip to the home of hurling.

The game was played under perfect weather conditions, although the ground was a little soft, to be expected in January! The Lucan lads performed well throughout the game running up a score 2-15 while Thurles Sarsfields put 1 -8 on the scoreboard.

Soup and sandwiches in the clubhouse there to warm every one up afterwards before we hit for home again where the lads had another feed of Chicken Curry back at the club!

Plenty of positives to take from the day, with some lads playing together for their first time.. and of course a chance for Boiler and Boxer to experience the fresh country air.