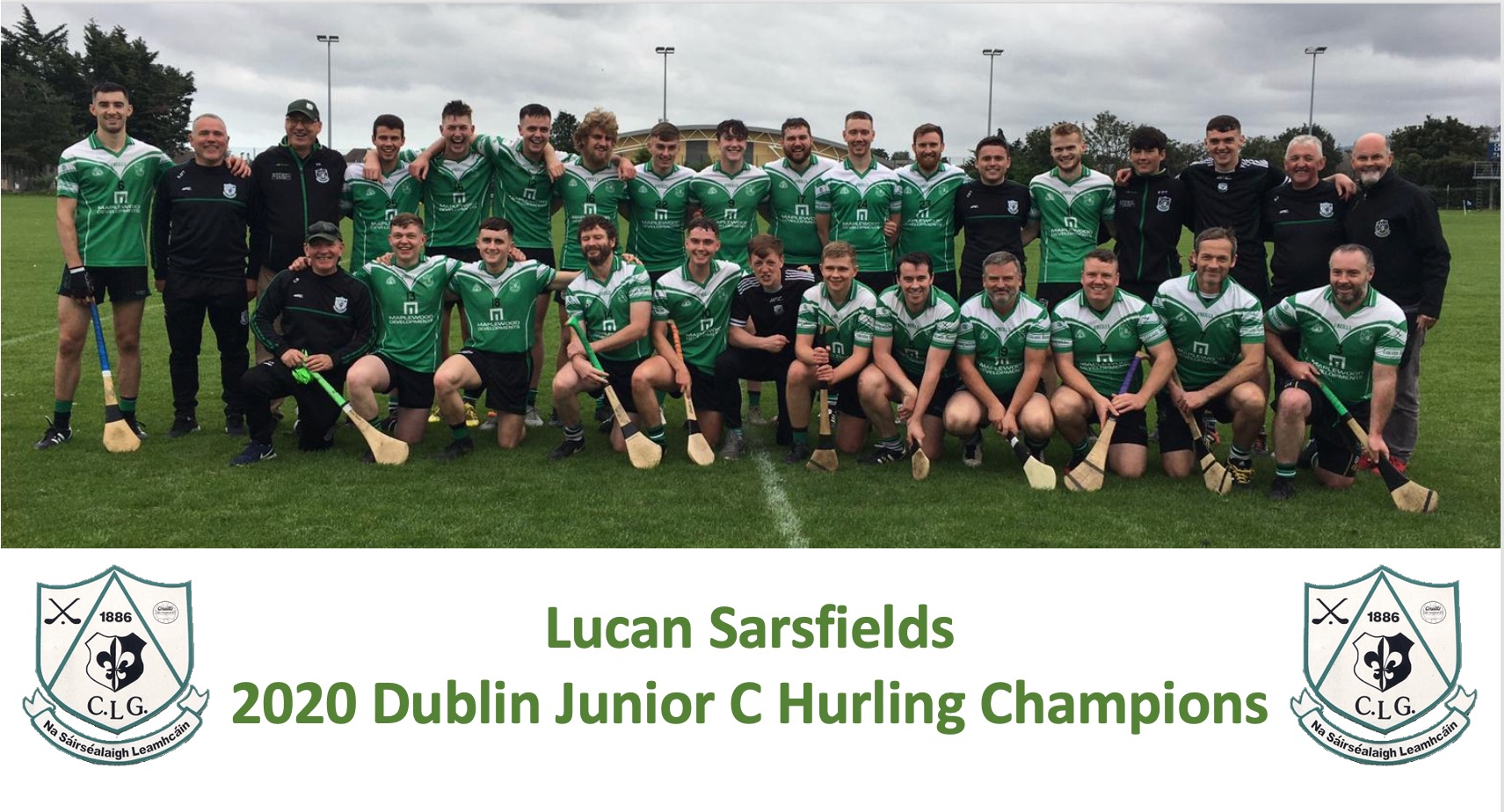 Our Junior B’s triumphed over St Sylvesters to capture the Junior ‘C’ title in O’Toole Park last Sunday. This was a second successive championship win for our Junior B’s, having captured the ‘D’ title last year, but over in Parnell Park, it was heartbreak for the Junior A’s as they lost by the narrowest of margins to St Brigids in the ‘A’ Final. Match reports below.

In the Camogie Junior 3 Shield Semi-final on Sunday, Lucan Sarsfields advanced to the final next Sunday at the expense of Commercials after extra time was played, however, the Junior 4’s lost their Shield semi-final at home to Naomh Peregrine. Next Sunday will also see the Intermediate Camogie team face CBC/Portobello in the Shield Final

The Senior and both Junior football teams continue their cup campaigns this weekend.

All underage games have been suspended until at least October 10th, please continue to observe the guidelines, remember, no spectators are allowed at  adult games.

25th Anniversary!! On the Third Sunday in September, 1995, the Boys in Blue won their 22nd All Ireland Title. 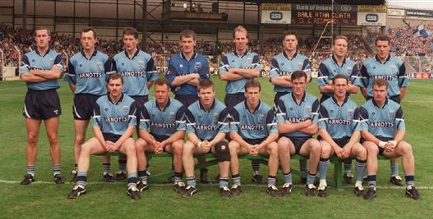 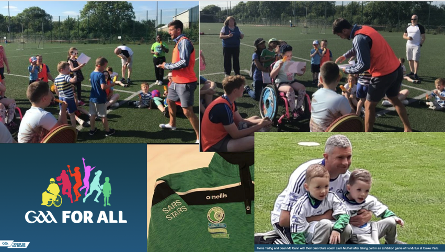 Coming up next week...

Please find below information about the first event in the RCSI MyHealth Series 2020/2021, ‘Living with the New Normal'. This will be a virtual only event. A panel of RCSI experts will address the significant impact that sudden and extreme change can have on people’s lives, what we can do to make change easier to accept, and how to talk to our children about COVID-19. The panel discussion will be aired on Tuesday, 29 September at 6.30pm. A link to watch will be shared in advance.

For more information and to register your interest, please visit www.rcsi.com/MyHealth20.

Details on the next two events, ‘A Toolkit for Winter Readiness’ and ‘Supporting Child and Youth Health this Winter’ can also be found on the website.

The Lucan District Credit Union Academy for girls and boys born in 2013, 2014 and 2015 only, returned last Saturday. To register your child for a place, contact David Moran, Club GPO, on 0879267607. Pre-registration with David is essential.

The 12th Lock Café opening hours 6-9pm Monday to Friday and 9:30am to 1:30pm on Saturday. These times may change in line with Covid-19 guidelines. Now on sale: Club Midi Socks!

There was no winner of the €4200 Lotto Jackpot sponsored by Clandillon Motors held on 17th September, The numbers drawn were 2, 9, 16, and 23. The lucky dip winners of €30 each are: Clodagh & Donal Brady, Kevin Porter, Mary Roche, B. Young and Madeline Cotter. The jackpot for the next draw is €4600, sponsored by Coláiste Laichtín, Inis Oírr, managed by Cormac Gordon and will be held on Thursday 23rd September. You can enter the draw by clicking http://bit.ly/LucanSarsfieldsClubLotto before 6pm on Thursday.

If you have Match reports and articles for inclusion in the weekly Lucan Sarsfields GAA Club Notes, please email them to lucansarsfieldspro@gmail.com before 9pm on Monday Evening.

All Juvenile and Underage Games postponed

In the culmination of a short adult club hurling season, it was championship finals weekend and Lucan had two teams involved on Saturday.  We experienced the agony and the ecstasy of final day as our Junior A’s lost out by just a point to St Brigids in the Junior ‘A’ final in Parnell Park, while our Junior B’s overcame St Sylvesters to capture the Junior ‘C’ title in O’Toole Park. This was a second successive championship win for our Junior B’s, having captured the ‘D’ title last year.

This was a heart-breaking defeat for Lucan who came from 5 points behind coming into the closing stages to level the match deep in injury team, only to be denied by a last gasp winner for Brigids. However, on balance Brigids deserved their victory, playing more consistently over the hour while Lucan only really hurled well in patches and paid the price for a low key first half. Brigids started well, playing with the benefit of a decent breeze and led 0-5 to 0-3 by the first water break. That pattern continued until half time by which time they had extended the lead to 0-9 to 0-4. It was a half with little enough fluid hurling and both teams relied on placed balls for most of their scores, with Lucan conceding too many frees as Brigids dominated possession.

The introduction of Colm Behan and Gavan Millea at half time gave Lucan renewed strength and energy for the second half and they started to be more competitive. They quickly reduced the gap to 3 points and then Kevin O’Reilly raced through the Brigids defence and finished expertly for an equalising goal in the 36th minute. Another point soon followed as Lucan edged ahead for the first time. However Brigids regained the initiative and scored six points without reply to lead by five after 52 minutes. The pendulum swung again though as Lucan refused to die and gradually clawed their way back with four frees from O’Reilly and then an equaliser from Behan deep into injury time. Extra time looked likely but there was one more twist as Brigids won possession from the puck out and found a free forward in the Lucan penalty area. The inevitable foul followed and Brigids took the point from the penalty to secure the win. Lucan showed great fighting spirit but overall Brigids had the edge. Lucan were very reliant on Kevin O’Reilly placed balls for scoring threat and he accounted for 1-7 of their 1-13 total.  The Lucan full back line performed well and restricted Brigids goal opportunities however Brigids dominated the puck out possession battle, which was a key strength for Lucan in previous rounds.

Overall it was a year of good progress for this team. Last year they had to survive a playoff to avoid relegation and this year they were just a puck of a ball away from winning the Championship. With many good young players coming through, there is certainly an opportunity to build on this momentum and capture the title next year.

Lucan captured the title after a high scoring and entertaining encounter at O’Toole Park. The early exchanges were evenly contested and Syls held a narrow advantage 0-5 to 0-4 at the water break. Lucan soon took the initiative with two quick goals putting them in the driving seat for the rest of the match.  By half time the score was 2-6 to 0-9 in Lucans favour. Mid way through the second half Lucan have added a third goal and extended the lead to 5, 3-9 to 0-13. However, Sylvesters responded with a couple of goals in between Lucan points and the deficit was reduced to just two points, 3-12 to 2-13 with five minutes to play. Lucan held their nerve and edged the scoring in those final minutes to win out on a score line of 3-15 to 2-15.

This was an excellent team performance from Lucan who fully deserved the win. James Mullins gave a man of the match performance in the Lucan half-back line beside captain Peter Fagan who also had an impressive hour. Kevin Roche and Philip Kane were very solid in the full back line while the introduction of Sean Kelly and Conor Rigney provided youthful pace in the Lucan defence when needed. Andy Carroll scored two goals and was a constant threat in the full forward line where Killian Boylan also impressed scoring 1-3. Ciaran Keane was ever reliable from placed balls and clipped over two lovely sideline cuts that Kevin O’Reilly would have been proud of! Alex Hanley also had an impressive outing at half forward. Lucan used the bench well also and the strength of the panel was evident in the quality coming in. Overall, another great year for this team and a second successive championship secured, a great credit to the management team and the full panel of players.  Some of these players certainly have the potential to play at a higher level and there are plenty others coming through to continue the positive momentum.